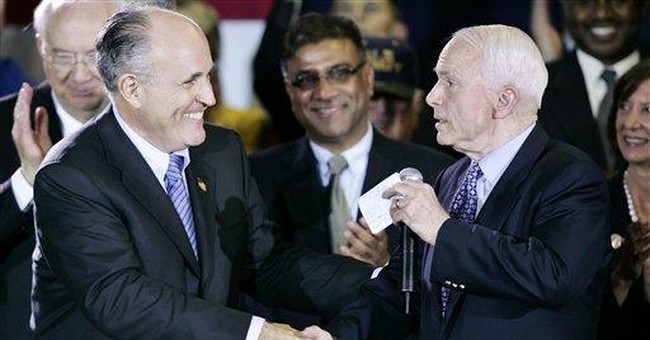 Giuliani said Obama’s praise for a recent Supreme Court decision to grant terrorist detainees rights to habeas corpus hearings was “startling” in a conference call on behalf of the McCain campaign Wednesday morning.

It shows “more concerned about the rights of terrorists than the American people have to safety and security,” Giuliani said. Under the new decision, “It is fair to say that Osama Bin Laden [if caught and taken to Guantanamo Bay]…would be given new rights that no one else has been given before,” Giuliani said.

In addition to speaking to reporters on a conference call Giuliani appeared on MSNBC and CNN to blast Obama earlier that morning, indicating a substantial, renewed effort to boost McCain. “This is going to be a debate that is joined many times during this campaign because it’s an honest one,” Giuliani said. “Senator Obama has a defensive approach to terrorism.”

Giuliani’s remarks come in response to remarks Obama made in an interview with ABC news that were aired Monday evening. Obama said, “What we know is that, in previous terrorist attacks -- for example, the first attack against the World Trade Center, we were able to arrest those responsible, put them on trial. They are currently in U.S. prisons, incapacitated. And the fact that the administration has not tried to do that has created a situation where not only have we never actually put many of these folks on trial, but we have destroyed our credibility when it comes to rule of law all around the world, and given a huge boost to terrorist recruitment in countries that say, "Look, this is how the United States treats Muslims."

The former Mayor also noted criticisms he was making of Obama’s philosophy toward terrorism were also made by Obama’s former primary opponent Hillary Clinton.

“She described the way he deals with terrorism, the way he proposed dealing with it, talking to some of these countries without preconditions, she described it as irresponsible,” Giuliani said.

This is the second conference call the McCain campaign has organized in two days to attack Obama on terrorism.