Lots of Fodder for Attacks at Dem Debate 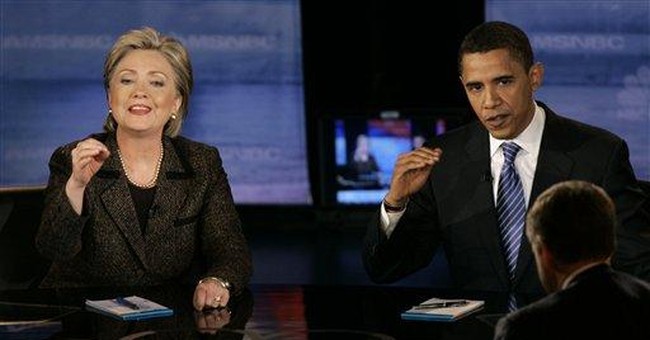 It’s been nearly two months since Democratic presidential contenders Hillary Clinton and Barack Obama have squared off one-on-one and there’ll be lots of opportunity for the two to attack each other this evening.

Clinton and Obama will participate in a debate hosted by ABC News Wednesday at 8 pm Eastern.

The event takes place while Obama struggles to beat back allegations he is too “elitist” and Clinton tries to close the gap in the popular vote and pledged delegates in the final months of the Democratic primary.

At a private San Francisco fundraiser Obama suggested “bitter” Americans “cling” to wedge voting issues like gun rights, marriage and border security when faced with economic hardship. The Clinton campaign has since seized on those remarks to suggest Obama is out of touch with voters.

Clinton also tried use Obama’s slip-up to gain traction with gun-owners. “You know, my dad took me out behind the cottage that my grandfather built on a little lake called Lake Winola outside of Scranton and taught me how to shoot when I was a little girl," Clinton told supporters in Valparaiso, Indiana. “Some people now continue to teach their children and their grandchildren. It's part of culture. It's part of a way of life. People enjoy hunting and shooting because it's an important part of who they are. Not because they are bitter.”

Obama chastised Clinton in return. “She is running around talking about how this is an insult to sportsmen, how she values the Second Amendment. She's talking like she's Annie Oakley,” he said at a campaign stop later.

Questions about gun rights are expected at the debate which will be held on the one-year anniversary of the Virginia Tech shootings.

The last Democratic debate was held on February 26 in Cleveland, Ohio. Since then, both campaigns have encountered stumbling blocks that each may point out at the debate.

Weeks ago Clinton admitted she made “misspoke” while recounting a trip she took to Bosnia as First Lady in which she alleged she encountered sniper fire. Her former president husband Bill Clinton recently defended her story saying his wife was “exhausted” when she told the story, although she told it on multiple occasions.

Obama is winning with the popular vote and delegate counts, but has not secured enough delegates to win the Democratic nomination outright. Clinton has vowed to take the Democratic primaries to the convention in August. In the meantime Clinton surrogates have argued to the party’s superdelegates, who are expected to ultimately determine the Democratic nominee, that Clinton would be a better candidate to face-off against GOP presidential nominee John McCain in a general election.

Part of her argument relies on Obama’s relationship with his longtime friend and controversial pastor Rev. Jeremiah Wright, who was exposed making anti-American and racist statements in videos sold by his church.

The debate will be held at Philadelphia’s National Constitution Center. ABC Anchors Charles Gibson and George Stephanopoulos will moderate.

An ABC spokesman told the New York Times, “We have an obligation to our West Coast affiliates to not make chunks of the debate available until their viewers have had a chance to see them.”