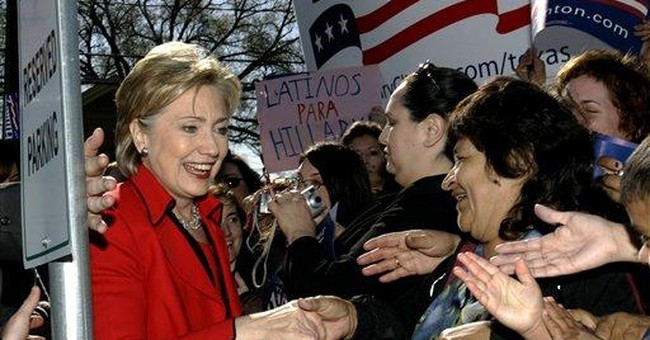 Hillary Clinton broke her 11-state losing streak with a barrage of attacks against Barack Obama and took Texas, Ohio and Rhode Island in her “must-win” Democratic nominating contests Tuesday.

Out of the four state primaries held that day, Obama only won Vermont.

Before the ballots were counted in Texas, Clinton made it clear she would be continuing her campaign, although she had been encouraged to concede the nomination to Obama.

She said her win proved to “everyone in Ohio and across America who has ever been counted out, but refused to be knocked out, for everyone who has stumbled but stood right back up and for everyone who works hard and never gives up, this one is for you!”

“The people of Ohio have said in loudly and clearly,” she cried. “We’re going on, we’re going strong and we’re going all the way!”

Shortly after Clinton declared victory in Ohio, but hours before it was announce she had also won Texas, Obama told his supporters in a televised address from Texas, “No matter what happens we have nearly the same delegate lead as this morning and we are on our way to the nomination.”

In the final days before the March 4 primaries the Clinton campaign highlighted Obama’s inexperience in foreign policy and alleged Obama officials had privately assured the Canadian government he would not support protectionist trade policies had has hyped on the campaign trail. They also raised questions about Obama’s relationship with Tony Rezko, the Chicago landlord and “political fixer” who was recently charges with eight counts of corruption, money laundering and aiding bribery.

On the advertising front, Clinton released a controversial “red phone” advertisement that some Democrats said came close to “fear-mongering.” It pointedly asked voters which President they would like answering a “3 am call” “while your children are safe and asleep” before cutting to images of Clinton answering the phone.

Clinton also scheduled appearances on Saturday Night Live and “The Daily Show” with Jon Stewart where she complained about the negative attention the media has wrought on her, but not Obama and drew attention to what she calls his “empty rhetoric.”

Obama described the coordination of these efforts as a “kitchen sink strategy” and expressed shock media had given attention to the attacks. “I was a little surprised that all the complaining about the refs actually worked as well as it did for them, this whole spin on how the press has been so tough on them and not tough on us” he told reporters traveling with him on Tuesday.

“I didn’t expect that you guys would bite on that,” he said.

Days before the nominating contests, Clinton campaign senior officials said they were certain she would “blunt” Obama’s momentum Tuesday with these attacks and on the issues of security and the economy.

“Obama can’t seem to be Commander in Chief against Senator Clinton,” chief strategist Mark Penn told reporters I a conference call March 2. “How can he possibly expect to be seen as someone who could win the Commander-in-Chief argument against John McCain?”

“We have also put the central question of who is the right person to be the manager and steward of this economy during a tough and difficult period where the next president is likely to inherit a recession, a credit crunch and other extremely tough economic problems,” Penn said.