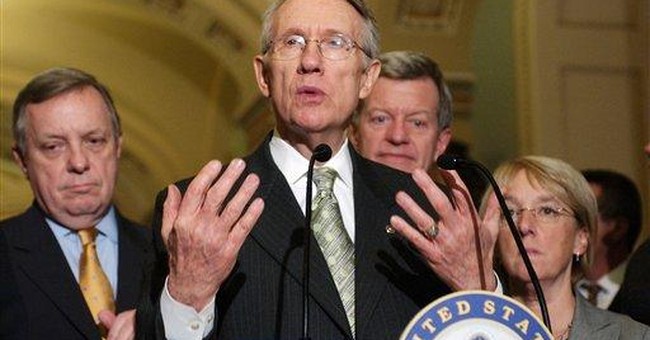 As Congress debates giving immunity to phone companies that assisted the government in tracking terrorist communications, trial lawyers prosecuting those phone companies have poured money into the coffers of Democratic senators, representatives and causes.

One maxed-out lawyer donor, Matthew Bergman of Vashon, Washington, has given more than $400,000 in his name to Democrats. In the 2008 cycle alone he donated $78,300 to various campaigns.

Bergman’s law firm’s website says he also specializes in “identifying viable asbestos defendants, locating evidence and developing legal theories to hold offending companies accountable.” In 2004, his firm split a $4.3 billion payout from Halliburton with seven other law firms. $30 million of that was delivered to their firm's asbestos victim clients.

Another lawyer prosecuting the phone companies is Mikal Watts of Corpus Christi, Texas, who has given more than $200,000 to Democrats. Watts has prosecuted Ford Motors over defective tires and attempted to run against Republican Sen. John Cornyn (Tex.) for the Senate.

Since the New York Times broke a story in late 2005 that found the Bush administration had engaged in surveillance activities with cooperation from phone companies like Verizon, AT&T, and BellSouth, a debate has erupted, largely on party lines, over whether or not to protect those companies from prosecution under the Foreign Intelligence Surveillance Activities Act.

President Bush has aggressively called on Congress to do so, and Homeland Security Secretary Michael Chertoff has testified that FISA “is the radar we have for the 21st century to detect attacks before they happen.”

On Wednesday, the Senate held a critical vote on an amendment to the FISA reauthorization that would grant this immunity. It passed, but 29 Democratic senators voted against it. 24 of them have accepted campaign contributions from trial lawyers who are suing the government over those activities.

Two of them are running for President.

Sen. Barack Obama (D.-Ill.), who is in the running for the Democratic nomination, was given $28,650 from trial lawyers listed as counsel for plaintiffs who are suing those companies becuase they turned over phone records as a part of President Bush’s covert phone surveillance program. $19,150 of that was donated in the last year.

Sen. Hillary Clinton (D.-N.Y), the other main contender for the Democratic presidential bid, also accepted money from trial lawyers on the case. Records show those lawyers have poured $34,800 to her and her husband’s campaigns over the years. $12,150 of those donations were made to her within the last year.

Clinton did not vote Tuesday because she was campaigning. She has, however, voted against granting telephone companies immunity and other FISA reforms in the past.

Since 1997, Senate Majority Leader Sen. Harry Reid (D.-Nev.) accepted donations from three lawyers working the FISA case that amount to $10,000. The No.2 Democrat in the Senate, Dick Durbin, who is charged with whipping votes, has accepted $18,350 from 1996 through 2007 from lawyers listed as counsel against phone companies.

Now that FISA has been reauthorized in the Senate, the bill was sent over to the House where an effort to strip the immunity provision is expected. House Republicans are pressuring House Democrats to pass the Senate version of the bill quickly, as it is scheduled to expire on Saturday.

Records show that House Speaker Nancy Pelosi (D.-Calif.) accepted $3,750 in donations to her campaigns and PACs from these lawyers from 1996-2001.