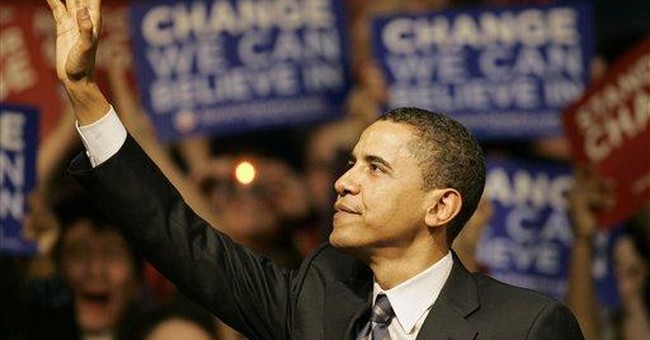 As Barack Obama shows signs of pulling away with the Democratic nomination, it appears he’s trying to find some wiggle room in his support of a firm withdrawal date from Iraq.

CBS’s Steve Kroft asked Obama in a 60 Minutes interview if he would pull out of Iraq according to a timetable “regardless of the situation? Even if there’s sectarian violence?”

Obama responded, “No, I always reserve as commander in chief the right to assess the situation.”

As a U.S. senator and Democratic presidential candidate, Obama has called on President Bush again and again to agree to a binding withdrawal date for U.S. troops to leave Iraq.

He even introduced legislation, titled The Iraq War De-Escalation Act of 2007, to remove all combat brigades from Iraq by March 31, 2008.

When Obama introduced his bill, he said on the Senate floor that: “The President must announce to the Iraqi people that within 2 to 4 months, under this plan, U.S. policy will include a gradual and substantial reduction in U.S. forces. The President should then work with our military commanders to map out the best plan for such a redeployment and determine precise levels and dates.”

This new position could be the beginning of a new, moderate war strategy designed for the general election. Over the weekend, Obama won primary contests in Louisiana, Maine, Nebraska, the Virgin Islands and Washington State with wide margins over Hillary Clinton.

Right now, Obama only has a small edge over Clinton in delegates. Obama has 1,134 and Clinton has 1,131 according to CBS, but Obama is favored to win other post-Super Tuesday elections.

Whoever wins the Democratic nomination will likely face Republican Sen. John McCain (R.-Ariz.), who was once a POW, chairs the Senate Armed Services Committee, backed President Bush’s “surge” of troops to Iraq, and opposes a fixed date for withdrawal.