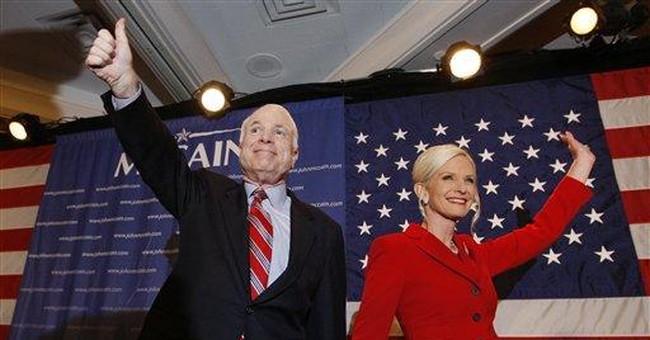 In his New Hampshire victory speech Republican presidential candidate John McCain spoke in definitive terms about the war in Iraq.

“We will never surrender, they will!” he told a crowd in Nashua, who chanted at different times “USA! USA!,” Mac is back, Mac is back!” and “John Mc-Cain, John Mc-Cain!”

The influential New Hampshire Union-Leader seemed to address these feelings in their primary day editorial, which asked voters to vote for McCain because of his “courage and conviction.” It concluded that “John McCain will lead this nation to victory in its multi-front war against Islamic terrorists” while keeping domestic spending in check.”

Most of the media attention on primary night was focused on the Democrats and the hard-hitting passage where McCain promised “no surrender” was overlooked. Here it is:

“We are the makers of history, not its victims. And as we confront this enemy the people privileged to serve in public office should not evade our mutual responsibility to defeat them because we are more concerned with personal or partisan ambition whatever the difference between us, so much more should unite us and nothing, nothing should unite us more closely than the imperative of defeating an enemy who despises us, our values and modernity itself. We must all pull together in this critical hour and proclaim that the history of the world will not be determined by this unpardonable foe, but by the aspirations, ideals faith and courage of free people. In this great historic task we will never surrender, they will!”

After narrowly beating Barack Obama for the Democrats, Hillary Clinton barely mentioned the Iraq war in her victory speech. She only said that if elected, she would “end the war in Iraq the right way.” She also promised better care for veterans and to restore America’s “standing, respect and credibility in the world.”