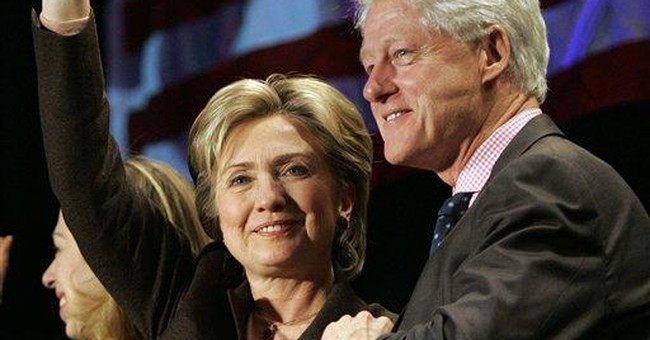 Bill and Hill Meltdown in NH

Bill and Hillary Clinton are showing signs of wear on the campaign trail in New Hampshire.

“The idea that one of these campaigns is positive and the other is negative when I know the reverse is true and I have seen it and I have been blistered by it for months is a little tough to take. Just because of the sanitizing coverage that’s in the media doesn’t mean the facts aren’t out there,” the former President told a questioner at a campaign event at Dartmouth College.

Clinton railed against Obama for claiming he is an anti-war candidate. Speaking as Obama, Clinton said, “It doesn’t matter that I started running for President less than a year after I got to the Senate from the Illinois state senate, I am a great speaker a charismatic figure and was the only one to oppose the war from the beginning always, always, always.”

Clinton shifted back to his view of the matter: “It is wrong that Senator Obama got to go through fifteen debates trumpeting his superior judgment and how he had been against the war in every year enumerating the years and never got asked one time, not once, well how could you say that when you said in 2004 that you didn’t know how you would have voted on the resolution, you said in 2004 there was no difference between you and George Bush and the war and you took that speech you are now running on off your website in 2004 and there’s no difference in your voting record and Hillary’s ever since. Give me a break.”

Mr. Clinton implied the media had hurt his wife a stop in Durham, New Hampshire on January 4 after the January 3 Iowa caucus.

“I think we can change it as long as you have access to information by people who are committed to judging everybody by the same set of rules and following the same set of rules,” Clinton said. “According to the most recent media analysis, that’s not what’s happened so far, but yeah, I think it should be done.”

In an interview with Fox News, Hillary Clinton seemed upset Obama was discussing John F. Kennedy and Martin Luther King Tuesday morning. “He basically compared himself to our greatest heroes because they gave great speeches,” she said.

The candidate explained: “President Kennedy was in Congress for 14 years. He was a war hero. He was a man of great accomplishments and readiness to be president. Dr. Martin Luther King Jr. led a movement. He was gassed. He was beaten. He was jailed. And he gave a speech that was one of the most beautifully, profoundly important speeches ever written in America, the ‘I have a dream’ speech. And then he worked with President Johnson to get the civil rights laws passed, because the dream couldn’t be realized until finally it was legally permissible for people of all colors and backgrounds and races and ethnicities to be accepted as citizens. I’m running for president because I believe that there is not a contradiction between experience and change.”

The headline Matt Drudge assigned to this story was “HILLARY UNLOADS: YOU’RE NO MARTIN LUTHER KING” and featured a photo of Obama and his wife, Michelle.

Since Hillary suffered a crippling third place finish in Iowa, there have been rumors she would drop out of the presidential race if she continued to lose in the early primary states. On Monday, she became teary-eyed discussing her candidacy, leading many news outlets to wonder if she was having an “Ed Muskie Moment.”

That day, Bill Clinton also earned a Drudge headline when he joked to voters that he can’t make his wife “younger, taller, male, there’s a list of things I can’t do.”