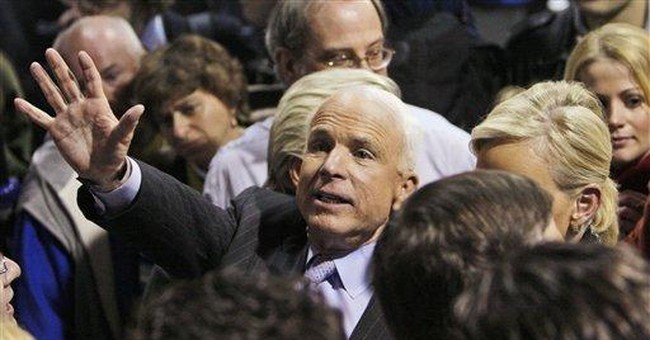 John McCain promised he would “get” Osama Bin Laden if he were elected President in 2008 in a GOP televised debate two days before the second in nation New Hampshire primary.

““I know how to get him and I’m gonna get him” McCain said on the campus of St. Anselm College on Manchester.

Moderator Chris Wallace followed up on McCain’s promise later in the debate. Wallace asked McCain if he had heard him say he would catch the terrorist.

“Sure,” McCain replied. McCain said he would do so by “improving our intelligence capability dramatically.”

During the debate, former New York City Mayor Rudy Giuliani also tried to puff up his security credentials. “I am the only one here who has had to face an Islamic terrorist attack, at the center of it” Giuliani said.

GOP presidential candidates sparred over national security and other issues for the second time in two nights, as each of them participated in a nationally televised debate sponsored by ABC News, CNN and WMUR Saturday night. Missing from the Sunday evening debate, however, was Ron Paul who was not invited by Fox News to participate.

When the debate concluded a Fox News focus group deemed Romney the winner of the debate by a show of hands.