Romney Closes IA With an Eye on NH 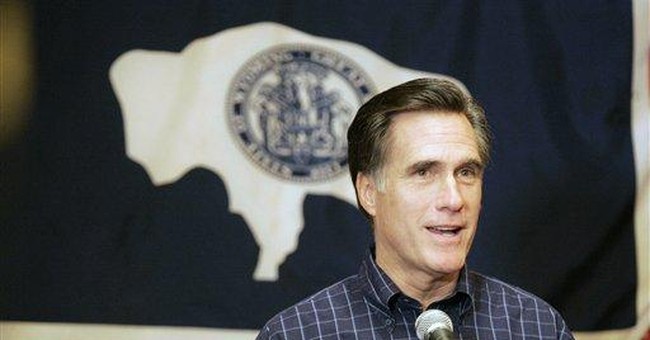 DES MOINES, IOWA -- Mitt Romney closed his final day of campaigning in Iowa with his chief Iowan rival Mike Huckabee in mind and with eye on John McCain in New Hampshire.

“It’s going to be important that we get a nominee who can play in each of these states and isn’t a one hit wonder,” Romney said Tuesday—a day after a Des Moines Register poll gave Huckabee a six point advantage over the Governor

Townhall asked Romney if that pitch was made because he was worried he would lose Iowa. “You got to have someone who can win Iowa and New Hampshire, who can appeal to people in the center of the country and the coasts,” Romney said. “I think somebody’s message who has not connected in Iowa, or has not connected in New Hampshire, that would not auger as well for them in a general election.”

On the eve of the Iowa caucus Romney discussed issues he believes Huckabee and McCain are weak on, like taxes and immigration.

At a “house party huddle” in Johnston on Tuesday Romney criticized Huckabee for calling the Bush’s administration’s management of Iraq “arrogant” and joking that President did not read national intelligence reports.

Romney followed up on his attack at a campaign rally on Wednesday by mentioning some people have “made jokes about him [Bush], or made attacks on him, but let’s not forget this: this President has kept us safe these last six years and that’s not easy.” This prompted applause from Romney supporters.

Shortly after the Iowa caucus votes are tallied on Thursday, Romney will jet to New Hampshire to ready himself for the Granite State’s January 8 primary. McCain has enjoyed a recent surge in New Hampshire polls and has been endorsed by several regional newspapers, including the influential Union Leader. Adding even more pressure to Romney, McCain released a hard hitting ad there that questioned Romney’s foreign policy credentials this week.

When asked for reaction about the negative spot at a Wednesday morning press conference Romney unexpectedly attacked McCain on national security--- widely considered to be the Arizona senator’s strongest issue.

“Senator McCain is an honorable person, but he’s been in the Senate for 25 years or more,” Romney said. “People have a lot of talk there, a lot of suggestions about what other people ought to do, but I’ve actually been leading during that time. Leading the Olympics at a time when we were looking for a heightened degree of security, leading a state that was looking to put together an even stronger homeland security program.”

Romney also contrasted his position with McCain's on taxes and immigration. “We have differences on issues and I will point out those differences,” Romney said.

According to Romney McCain “was just wrong” for voting against the Bush tax cuts and described McCain as “the final champion of that last bill [McCain-Kennedy] that came before the Senate that would have said to every illegal alien in this country that you get to stay here forever.”

The Romney campaign closed their last day of Iowa campaigning, which included four different flights to different Iowa cities, with a more a rally in Des Moines that was over 800-strong. There, the governor was flanked by his family, as well as gold-medal Olympic speed skater Dan Jansen, Sen. Jim DeMint (R.-S.C.) and Sen. Wayne Allard (R.-Colo.).