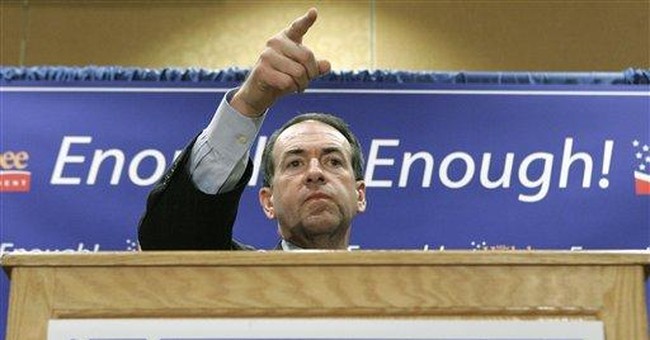 JOHNSTON, IOWA -- Mitt Romney issued strong words of support for President Bush’s war and domestic policies as a rebuke to Mike Huckabee who has been critical of the Bush administration on the campaign trail.

“I was disappointed to see yesterday Mr. Huckabee attack the President by suggesting he is not very well-versed in national foreign policy affairs, for supposedly not reading the national intelligence estimate over the last four years. That’s obviously completely inaccurate and wrong. The President has kept us safe over these last six years and is extraordinarily well versed in matters of foreign policy.”

“I’m not sure if Mr. Huckabee meant the attack as a joke, but this is not the time to be mocking our President,” Romney said.

“It was in bad taste and I think we should recognize the great work our President is doing and not take our rhetoric or plays from the Democratic playbook," Romney lamented. "This is the kind of stuff you’d expect of the Democrats, but is certainly not something you’d expect of a presidential contender on the Republican side.”

According to Romney, Bush did a “very effective job in responding aggressively to the attacks of jihadists on 9/11. I supported his decision to go into Afghanistan and I supported his decision to go into Iraq. I think he did a superb job in overseeing the collapse of Saddam Hussein’s military and government. I think he did a less effective job in managing the conflicts following the collapse of Saddam Hussein. That’s been said by many people, a number of mistakes were made. I think we were under prepared, understaffed and under managed, but I do believe that the new course that’s been set by the President and General Petraeus is working. It is working.”

“I also believe the President was right in pursuing No Child Left Behind. I know that has met resistance on both the left and the right, but he did what I think was right for our nation by evaluating which schools are succeeding and what schools are failing.”

“The Medicare Part D program that the President has pursued had a positive feature in providing prescription drugs for our seniors, but added a very substantial amount to our entitlement burden which I think is unfortunate and I would have rather seen a complete revamping of our entitlement programs.”

Romney also responded to the “sneak peek” look Huckabee gave to national media of a negative ad that he said was too hard-hitting to run in Iowa on Monday.

“It reminds you a bit of a person who would stand up and say ‘I’m not going to call my opponent any names, but here are the names I would call him if I were going to call him names” Romney said. “What he did yesterday didn’t fool the media and it won’t fool the people of Iowa either.”

Romney made these remarks at impromptu press availability at one of the several “house party huddles” being held for him by Iowan supporters. The press conference was held in the basement of an Iowa family home in Johnstown.