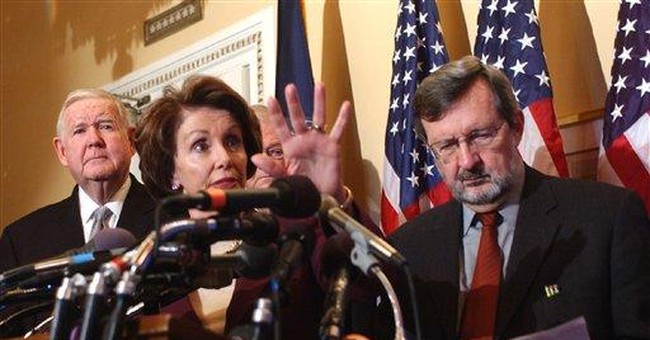 Two anti-war Democrats who hold congressional purse strings offered President Bush a deal on war funding today: give us a withdrawal date and we’ll give you the money.

House Appropriations chairman Rep. David Obey (D.-Wisc.) and Rep. John Murtha (D.-Pa.), chairman of the Defense Subcommittee on Appropriations said they would agree to pass a funding bill if President Bush would commit the military to a no-torture policy and agree to a withdrawal all troops from Iraq by December 2008.

“The money is not the issue,” Obey said in a Tuesday morning press conference. “The issue is that the President is simply refusing to accept the conditions under which the money is provided.”

In addition to the $471 billion Defense bill Congress passed, President Bush has requested $196 billion in war funding, but Congress has yet to approve it.

Last week, Defense Secretary Robert Gates warned he may have to lay off 200,000 civilian employees and shut down some military operations unless a funding bill is passed soon.

Murtha got especially testy during the press conference when a reporter asked if Democrats would face “huge political ramifications” if the Pentagon was shut down.

“You are missing the point,” Murtha said. “Do you believe what the Pentagon says? Of all the things they have told us? Go back and look, mission accomplished, al Qaeda connection, weapons of mass destruction. On and on and you believe the Pentagon?”