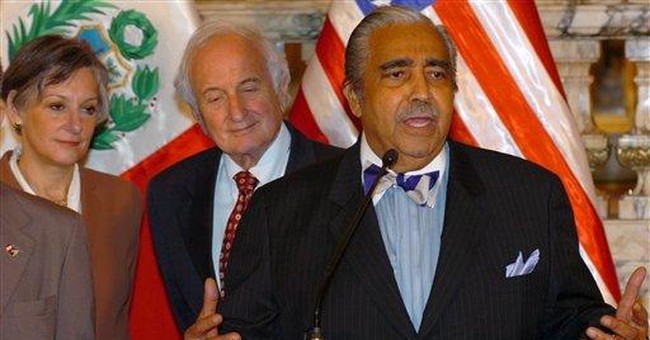 Seeking to beat back the “mother of all tax hikes,” House Republicans brandished a non-partisan government report that said if Rep. Charles Rangel’s (D.-N.Y.) alternative minimum tax elimination plan were enacted, 113 million Americans would be forced to pay higher taxes in 2011.

According to the report, published by the Joint Committee on Taxation, which forecasts tax revenues for the government, 94 million families earning between $20,000 and $200,000 per year will pay more taxes if Rangel’s bill is passed and the Bush tax cuts expire as scheduled.

Over ten years, this would cost taxpayers $1.3 trillion, prompting Republicans to call it the “mother of all tax hikes,” or MATH for short.

Although most taxpayers would pay more money under the plan, the JCT report said 800,000 families would see a tax decrease.

The White House said in a statement released by their budget office that it would veto the bill if passed. “The administration does not believe the appropriate way to protect 21 million additional taxpayers from AMT liability is to impose a tax increase on other taxpayers.”

As Chairman of the Ways and Means Committee, Rangel has more power than anyone else to write tax policy, which must originate from the House of Representatives. The AMT was enacted in 1969 ensure that 155 wealthy households that were eligible for multiple tax breaks paid taxes. Since it was never adjusted for inflation, more and more Americans have been forced to pay the AMT each year, trapping some middle class families who earn $75,000.

Last year, nearly 4 million people were hit by the AMT at a cost of $24 billion. The AMT is scheduled to reset in 2008, which would ensnare up to 23 million taxpayers.

To avoid this problem, Rangel’s bill seeks to repeal the AMT, but under the Democrats’ self-imposed “pay-as-you-go” rules, he must make up for the revenue through a tax increase or a spending cut.

No significant spending cuts have yet been proposed.

Despite Republicans complaints, Democrats are promoting the bill as a tax cut for the middle class. By using Congressional Budget Office scores, which operate under “current policy” that assumes no additional cost to taxpayers when the Bush tax cuts expire and the AMT resets-- Rangel claims 91 million families will receive a tax cut.

The Joint Tax Committee, however, calculates future tax revenue based on “current law” which accounts for those who will pay the government more taxes when the Bush tax cuts expire and when the AMT resets.

When asked about different revenue forecasts and baselines from different government agencies for the outcome of this bill, Rangel’s Republican counterpart Ranking Member Rep. Jim McCrery (La.) said he was operating from a “reality baseline.”

“If a taxpayer who earns the same amount of money this year as last year has to write a bigger check to the Internal Revenue Service, that’s a tax hike,” he said in a press event to drum up opposition to Rangel’s plan.

Republican Ways and Means committee member Rep. Eric Cantor (Va.) said incredulously, “When I look at what the Democrats are doing with Charlie’s MATH I ask myself ‘are they out of their minds?’ It’s almost as if Charlie Rangel and Nancy Pelosi were under this [Capitol] dome oblivious to what’s going on in the world around us.” He cited concerns about the weakening American dollar, increased gasoline and heating costs and the subprime mortgage collapse. “And yet, the Democrats want to sit here and embark on this insane attempt to raise $3 trillion in taxes!”

Former House Majority Leader Dick Armey, president of the anti-tax advocacy group FreedomWorks, said both sides of the aisle were probably engaging in “dueling disinformation” in a phone interview.

“Republicans want to hang Charlie’s tax plan around every Democratic candidate’s neck,” Armey said. “They are going to make this story as grim as possible”

But, Armey said revenue forecasts from the Joint Tax Committee were “the best information we’re going to get” since tax policy is under their jurisdiction.