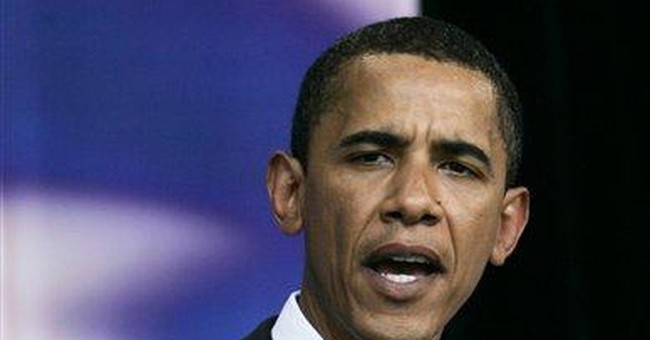 Editor's Note: A video clip of Obama's August 13 statement appears below this column on page 2.

Barack Obama appears to have made another foreign policy misstep.

At an August 13 New Hampshire campaign stop, Obama said that as President he would move more U.S. troops to Afghanistan to “get the job done there, and that requires us to have enough troops so that we’re not just air-raiding villages and killing civilians, which is causing enormous problems there.”

The Republican National Committee is demanding an immediate apology from Obama. Chairman Mike Duncan issued a statement that said: “It is hard to imagine that anyone who aspires to be Commander-in-Chief would say such a thing about our brave men and women in uniform. Obama owes our armed forces an apology – today.”

Chicago Tribune reporter David Mendell, who just released the biography “Obama: From Promise to Power,” said of Obama on the Hannity and Colmes Show Tuesday that “He’s been…a little bit all over the place with his foreign policy.”

Obama’s assessment of the work being done by American troops in Afghanistan comes after his controversial August 1 pledge to take unilateral action against Pakistan as Commander-in-Chief if President Pervez Musharraf did not root out terrorists residing in his country.

“Let me make this clear. There are terrorists holed up in those mountains who murdered 3,000 Americans,” Obama said in Washington, D.C at the Woodrow Wilson International Center for Scholars. “They are plotting to strike again….If we have actionable intelligence about high-value terrorist targets and President Musharraf will not act, we will."

Before that speech, the Illinois senator flubbed an answer to a question about the use of nuclear weapons. On August 2 an Associated Press reporter asked Obama, “Is there any circumstances where you'd be prepared or willing to use nuclear weapons to defeat terrorism and Osama bin Laden?”

He replied, “That’s not a hypothetical that I'm going to discuss.” When the reporter asked him to talk about tactical nuclear weapons, Obama said, “I think it would be a profound mistake for us to use nuclear weapons in any circumstance.” Then he backed off: “Let me scratch all that. There's been no discussion of nuclear weapons. That's not on the table.”

In a July 23 Democratic debate, Obama ignited a scuffle between himself and Hillary Clinton when he said he would engage in diplomatic talks with rogue nations. When all the candidates were asked: “Would the candidates for president be willing to meet, within their first year in office, with the leaders of Iran, Syria, Venezuela, Cuba and North Korea?” Obama said yes. Hillary said no.

]On the 2008 presidential campaign trail, Obama often reminds supporters of an anti-war speech he gave in 2002 as an Illinois state senator that is intended to highlight his foreign policy foresight. Obama likes to repeat a line from that speech, in which he called the Iraq war “a dumb war, a rash war” and warned that "U.S. occupation of undetermined length, at undetermined costs, with undetermined consequences.”

He doesn’t, however, repeat the portion of his speech that precluded those lines and implied the Iraq War was constructed for political gain by senior White House advisor Karl Rove: “What I am opposed to is the attempt by potential hacks like Karl Rove to distract us from a rise in the uninsured, a rise in the poverty state, a drop in the medium income—to distract us from corporate scandals and a stock market that has just gone thorough the worst month since the Great Depression. That’s what I am opposed to. A dumb war. A rash war, a war based not on reason, but on passion, not on principle, but on politics.”

Click the "play button" on the screen below to watch the video of Obama's August 13 statement: