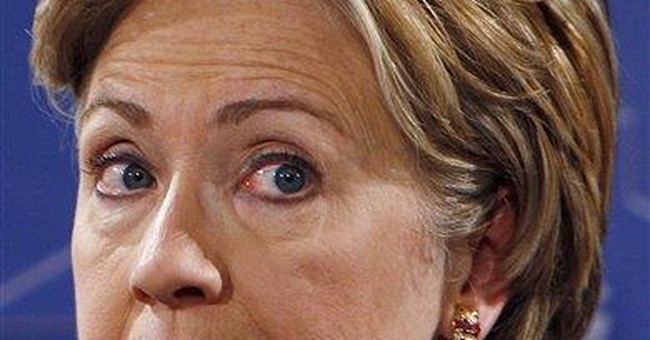 Hillary Clinton admitted she criticized the Chairman of the Joint Chiefs of Staff for his controversial statements about homosexuality only after coming under fire herself from a gay lobby group in a forum for gay rights Thursday evening.

Clinton said she made a mistake by hesitating to oppose his comments.

Last March, Gen. Peter Pace told the Chicago Tribune that homosexuality was “immoral” and that he did not support the military’s policy of “don’t ask, don’t tell.” Shortly thereafter, Clinton was asked by a reporter to comment on Pace’s remarks about homosexuals.

Clinton’s initial answer was tight-lipped: “Well, I am going to leave that to others to conclude.”

Clinton explained that after telling ABC News it was for “others to conclude” whether homosexuality was immoral or not, “My friends started calling me,” referring to her allies at HRC. The next day, Clinton clarified she did not think homosexuality was “immoral” and began criticizing Pace.

“I should have put it in a broader context,” Clinton apologized Thursday. “It was a mistake.”

She continued: “Because my view was as a chairman of the Joint Chiefs he had absolutely no right to say what he said. I disagree with him profoundly, but what was really offensive is that he was in a position of responsibility that had a direct impact on the lives of hundreds of thousands of these young people in the military. So I went right at him on ‘don’t ask, don’t tell.’”

The HRC and Clinton alliance dates back to the Clinton White House when, as First Lady, Mrs. Clinton worked closely with the gay lobby to defeat the Federal Marriage Amendment. When HRC President Joe Solmonese introduced Clinton at a keynote address she gave to the group earlier this year, he said that he and Hillary had a “storied past” that began when he was working with Emily’s List, the group that raises money for pro-abortion Democrat candidates.

“It was Senator Clinton who first summoned me to the Hill to talk about our strategy for defeating the federal marriage amendment,” he said.

“She brought us the Senate to brief people on how to get this done,” Solmonese recalled. “She convened the meeting and she made sure everyone was in line.”

In the Thursday forum, Clinton also said she believed the Republican-led, “demeaning, degrading and mean-spirited” opposition to gay rights “is over.”

In a 2008 candidate questionnaire for HRC, Clinton indicated she supported civil unions, workplace protections for homosexuals, federal hate crimes legislation, federal benefits and insurance coverage for same-sex couples, adoption rights for same-sex couples, the repeal of “don’t ask, don’t tell,” increased funding for comprehensive sex education and HIV/AIDS and the right of an American citizen to petition for immigration sponsorship for a same-sex partner.

The HRC/Logo event was only broadcast on the gay network station and on their website via streaming video. It was moderated by Margaret Carlson and a group of three questioners: HRC President Solmonese, openly gay Washington Post editorial page writer Jonathan Capehard and lesbian singer Melissa Etheridge.

All of the Democrats campaigning for their party’s nomination for President, save Sen. Joe Biden (Del.) and Sen. Chris Dodd (Conn.), participated. The forum allowed each candidate to be questioned individually for 18 minutes by Carlson and the panelists.

HRC will, but has not yet endorsed a 2008 presidential candidate. Clinton is heavily favored by HRC, but a presidential campaign endorsement from the gay lobby could hurt her in a general election, according to recent polling.

A poll released August 8 by the Quinnipiac University Polling Institute showed that an endorsement from a gay rights group could turn off twice as many voters as it attracts.

In a Wednesday press conference at the National Press Club, Quinnipiac University Polling Institute assistant research director Peter Brown explained, “In Ohio, for instance, ten percent of the voters say they would be more likely to vote for a candidate endorsed by a gay rights group, but 34 percent would be less likely.”

Brown also said their poll, which tested voters in the swing states in Florida, Ohio and Pennsylvania, found that endorsements from pro-abortion groups and business interests would have a negative effect on voters in those states.

View the video of Hillary admitting that she panders to the gay lobby by clicking here.