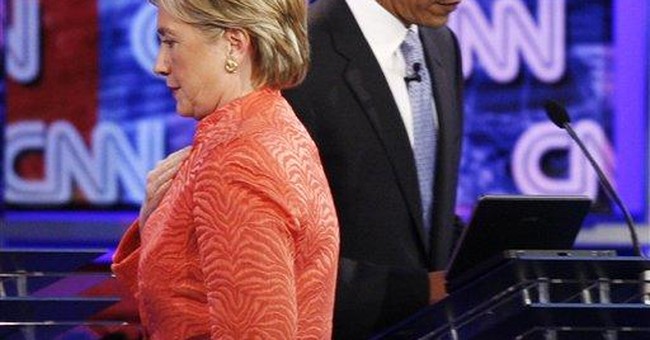 Barack Obama has a slim advantage in two out of the four early primary states, but would get crushed on "Tsunami Tuesday" by Hillary Clinton for the Democratic nomination for President, according to recent polls.

Obama has made significant gains in New Hampshire and South Carolina over the last month, but hasn't done enough yet to overcome his large polling deficits in other early primary states.

Last month, Obama would have lost by 9% in New Hampshire to Clinton. Now, he would beat her by 3%, according to a new poll released by the American Research Group. Obama also closed a 12-point polling deficit to Clinton in South Carolina in the same time period. In June, he was polling 21% to Clinton’s 37%. ARG has Obama winning by 5% if the Palmetto Stateprimary election were held today.

If the polls were to accurately play out, Clinton would then win Florida by 14% before taking three out of the four primary elections held on February 5 in California, Illinois, New Jersey and New York. The closest of those elections would occur in Illinois, the state in which Clinton was born and that Obama represents in the Senate. A statewide July poll conducted by the American Research Group gave Obama a 5% advantage there.

Polls predict Clinton would then easily win California by 25%, New Jersey by 22% and New York by 34%.

The possible Clinton Tsunami Tuesday wave is reflected in her wide leads in national polls. The Rasmussen Report declared on Monday, "Democrats will nominate Clinton unless Barack Obama can show them a definitive reason to change their mind" and that "Obama needs a knock-out punch because Clinton will win the bout on points." Their July 30 weekly poll among likely Democratic primary voters polled Clinton at 41% and Obama 24%. A national Diageo/Hotline poll among registered Democratic voters gave Clinton a 9% winning margin over Obama.

Below is the polling breakdown: