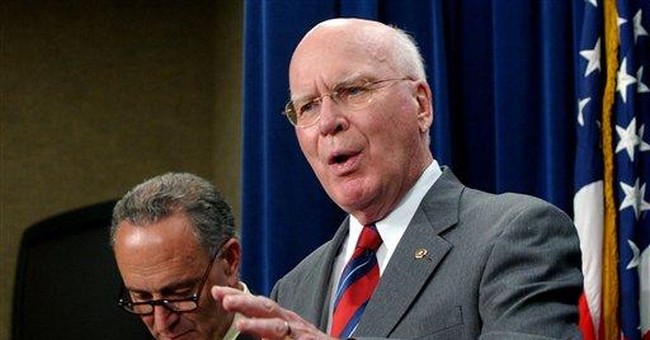 The Democratic chairman of the Senate Judiciary Committee thought the Caucasian judge Leslie Southwick was suitable to sit on a Mississippi’s district court, but he’d prefer a black man for the higher ranking 5th Circuit Court of Appeals.

Chairman Sen. Patrick Leahy (D.-Vt.) is opposing Southwick for the 5th Circuit post in favor of a black man, Honorable Henry Wingate, because Mississippi has never had a black judge on the circuit court. In a May committee hearing, Leahy said the Bush Administration “continues to renege on a reported commitment to appoint an African-American to the Mississippi federal bench.”

Southwick is Bush’s third nomination to fill the Mississippi vacancy. Democrats opposed the first two judges he nominated, Judge Charles Pickering and a lawyer, Mike Wallace, on charges of “racial insensitivity.” To temporarily fill the post amid Democratic objections, Pickering was given a one-year appointment, but now the seat is vacant.

Before he was appointed to fill the 5th Circuit vacancy in June 2006, Southwick was unanimously approved by the Judiciary Committee for a district court judgeship. A September 20, 2006 Gannet news report about Southwick’s confirmation hearing for the U.S. District Court for the Southern District of Mississippi was titled “Judicial Candidate Enjoys Easy Going in Senate Hearing” because Republican senator Sam Brownback (Kans.) was the only one who even attended.

On September 26, the full Judiciary Committee passed on his nomination for a full Senate floor vote. Unfortunately for Southwick, no floor vote was scheduled before the end of the 109th Congress; his nomination was terminated and the Democrats regained control of Congress.

In the months that have passed, civil rights groups like the Alliance for Justice have combed through the more than 8,000 decisions Southwick has signed and the 850 opinions he authored in his career on the bench.

There are two opinions Southwick has signed, but did not author, that civil rights groups find objectionable. In one of the decisions, Southwick agreed that the use of a racial slur is not grounds for firing a state employee although slurs are “always offensive” and “inherently derogatory.” The other decision granted child custody to a heterosexual father instead of a child’s bisexual mother. Both opinions were available before the Judiciary Committee vote.

Senate Minority Leader Mitch McConnell (R.-Ky.) dismissed the importance of those cases on the floor Thursday.

“The only material change in Judge Southwick’s qualifications between last fall and now is the rating of the American Bar Association--The Democrats' gold standard for a judicial nominee,” McConnell said. “The ABA has actually increased its rating of Judge Southwick.”

Tony Perkins, president of the conservative Family Research Council, said in a Thursday news conference to rally support for Southwick that the nominating process reminded him of the children’s game “Mad Libs."

“The opposition, when a nominee [they dislike] gets sent up, they just fill in the blanks,” Perkins said. “If they want to stop somebody, they just throw out the word ‘homophobe’ or ‘racist.’”

After civil rights groups publicized the two opinions that they claim prove Southwick unfit for the job, black Democratic presidential contender Sen. Barack Obama (D.-Ill.) said he would oppose Southwick.p> Sen. Dick Durbin (D.-Ill.) is claiming he didn’t have enough information about Southwick at the time he supported him in the initial vote. Durbin went to the Senate floor Wednesday morning and said that he “came to the Southwick nomination with no advanced knowledge of the man or anything he had done.”

Judiciary member Jeff Sessions (R.-Ala.) said, “It appears--and I’m not going to go into all the details--[Democrats] want to kill this nomination in committee. They only have a slight one vote majority in the Senate.”

The Democrats on the committee also have a slim, one seat advantage over the Republicans.

“This is a really heavy-handed power play, there’s no doubt,” Sessions said.

Leahy has said he will call for a full committee vote on Southwick as soon as Mississippi Republican senators Thad Cochran and Trent Lott indicate they would like one. Republicans have made requests in recent weeks to vote to allow more time to increase other senators’ support of Southwick.