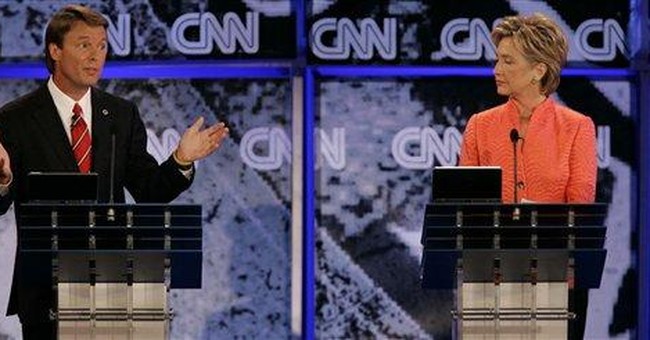 The day the first minimum wage increase in 10 years was enacted, Democrats and Big Labor made it clear they would ask for another hike soon.

On Tuesday, a 70 cent increase to the federal minimum wage went into effect. The minimum wage increase, passed by the Democrat-controlled Congress in May, will increase 70 cents twice more over the next two years, until it reaches $7.25 in 2009.

“Even when we get to $7.25, it’s not enough. We have to work hard for more!” labor leader Anna Burger of the Service Employees International Union yelled. Burger’s calls were echoed by Sen. Hillary Clinton (D.-N.Y.) Monday evening at the Democrats third televised presidential debate. “By the time we got it raised after 10 years, it was already out of date,” she said.

Sen. Ted Kennedy (D.-Mass.) said he was willing to raise the minimum wage much higher. He, along with Rep. George Miller (D.-Calif.), said, “We’re going to introduce a bill to raise it to $9.70 an hour.”

Chairman of the powerful House Ways and Means Committee, Rep. Charlie Rangel (D.-N.Y.) said increasing the federal minimum wage would give dignity to low-wage workers, as well as help defend the country. “This will protect national security because a nation can’t survive without its dignity.”

“Remember this is just the minimum,” Rangel said. “You ain’t seen nothing yet!” House Majority Leader Steny Hoyer (D.-M.D.) praised the Democratic House for passing an increase to the minimum wage within the first 100 days of control. “Unfortunately, it took just a little longer to get it through the Republicans in the Senate and to have the President sign the bill,” Hoyer said. “And, frankly,” Hoyer explained, “he only signed the bill only because there was other stuff in there that he wanted in that particular bill.”

The other "stuff" wanted by President Bush in the bill was supplemental funding for the war in Iraq. The wage raise was tied to $120 billion Iraq war bill passed by Congress in May. That bill also included $4.8 billion tax breaks for small business, designed to encourage reluctant Republicans to support the wage hike.

“We’ve had 100 and we’re going to have 100 more and we are proud of it, in preparation to have our valiant troops to come home,’ Reid said.

At the event, a small group of well-dressed, young men and women protested the Capitol Hill labor rally. They held sarcastic signs that said “Democrats, thanks for raising my taxes!” and “Democratic Accomplishments? 0.” Soon after they assembled, Capitol Police asked them to leave because they did not have a permit to protest the event.