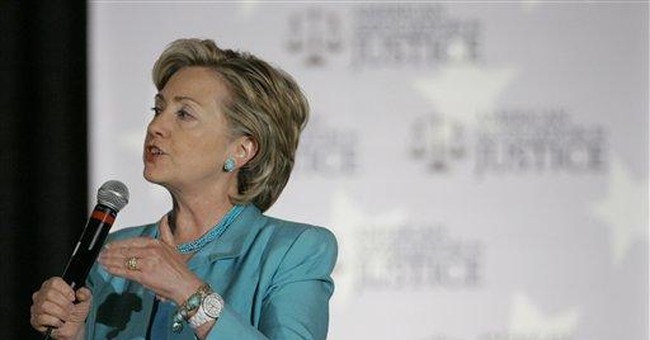 Obama raised $33.1 million over the last three months and Clinton raised $27 million, according Federal Election Commission reports that were due June 15.

Overall, Clinton has more money, though. She reported having $45.2 million in cash on hand. Obama has $36.3 million in the bank. The main difference between the two leading Democrats’ finances is that more of Obama’s money can be invested into the primary, while a large chunk of Clinton’s cash is earmarked for the general election.

Of the $36.3 million Obama has on hand, he can spend $34.7 million on his primary campaign--$1 million more than Clinton can spend on hers.

Primary candidates may only accept donations up to $2,300 per contributor. Any amount over $2,300 from a single contributor up to $4,600 must be put away for the general election should the candidate win their party’s nomination for President. Obama’s campaign has made a strategic decision to concentrate on raising primary cash from a large pool of donors in small amounts. Clinton, on the other hand, has sought donations for the maximum value of $4,600 from wealthy donors to fund both her primary and general election campaigns.

Obama’s campaign manager, David Plouffe, has estimated that the Obama campaign could ask 90 percent of their donors to give again because so many have not given the maximum amount.

Unlike Clinton, Obama will not accept any campaign donations from lobbyists or political actions committees.

Clinton does take lobbyist money. One firm, DLP Piper US, LLP, was especially fruitful. Their employees donated $176,320 to Clinton’s campaign in the second quarter. Recently, DLA Piper won a controversial bid to lobby the U.S. government on behalf of the Turkish government. One of the firm’s senior counsels, former House Minority Leader Richard Gephardt (D.-Mo.) who twice ran for President, endorsed Clinton for President earlier this month.

Clinton’s war chest is also supplanted by the $10 million she had leftover from her 2006 Senate campaign that she put into her presidential fund.

In addition to raising more primary cash, Clinton spent less money than Obama in the second quarter. Obama has spent $22.6 million so far this year. Clinton spent $17.8 million in the same time period.

Obama is carrying less debt, though. At the end of the second quarter, which ended June 30, his campaign reported $922,848 in campaign debts. The Clinton camp reported that it owes $3 million to their consultants. One of those debts is $421,874 owed to a firm owned by her chief pollster, Mark Penn.

Clinton and Obama had much more success fundraising in the second quarter than the Republican presidential candidates did.

By the June 30 deadline, Former New York City Mayor Rudy Giuliani had $18.3 million on hand. He has raised $17.6 million and spent $11.2 million in the last three months.

.Former Massachusetts Governor Mitt Romney raised $20.9 million and spent $20.7 million in the second quarter of fundraising. He has $12.1 million in cash on hand. Romney has loaned his campaign roughly $9 million so far from his personal bank account.