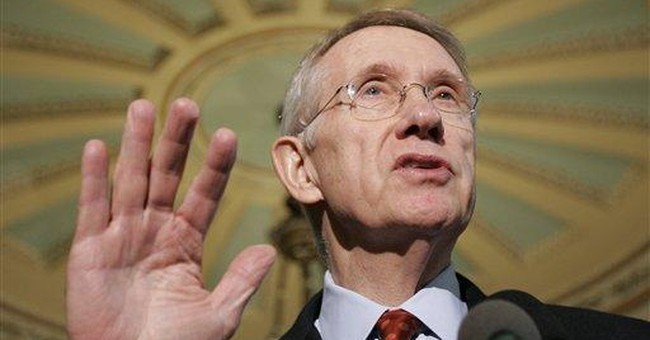 The Senate voted 64-35 in favor of restarting debate on legislation to grant legal status to millions of illegal aliens residing in the United States Monday afternoon.

Immediately after the vote, Senate Majority Leader Harry Reid (D.-Nev.) filed a cloture motion, which would end debate on the bill and order a final vote. Cloture is a three day process that requires one day to file, one day for debate and then one day to vote on the legislation.

To speed up the process, Reid has employed procedural move dubbed the “clay pigeon” to limit the numbers of amendments that could be made to the bill. To do this, he introduced a single amendment that will be divided into 24 or 25 smaller amendments of his choice.

Senators will vote on amendments to the bill Tuesday afternoon and all day Wednesday.

On Tuesday morning before the vote, President Bush predicted Senate passage of the bill by the week’s end. He said, “We’ll be moving our attention to the House after the Senate passes this comprehensive piece of legislation.”

Bush also said, "The country is better off. Our soul is constantly renewed. Our spirit is invigorated when people come here and realize the blessings of America. And so the bill that we've worked hard to craft is an important piece of legislation that addresses the needs of a failed system, that says we're going to change for the better."

On June 7, the bill fell 15 votes short of the 60 needed votes for cloture. Senators opposed to the bill argued more time was needed to amend the legislation, but supporters of the bill called the vote a stalling tactic. Leader Reid adhered to a strict-two week time frame he had scheduled for work on the bill. After the June 7 vote failed to get the necessary votes, Reid took up other pieces of legislation while senators continued to negotiate the bill.

Since the June 7 vote, there were 22 vote changes.

Democratic Sens. Jeff Bingaman (Colo.), Barbara Boxer (Calif.) and Jim Webb (Va.) had voted put off a final vote on the bill on June 7, but voted to restart work today.

Michigan senator Debbie Stabenow (D.) had previously voted in favor of a final vote on the legislation, but today voted against restarting work on the bill.

Additionally, the newly-installed Sen. John Barrasso (R.-Wyo.), the replacement for the late Sen. Craig Thomas who died on June 4, voted against cloture.