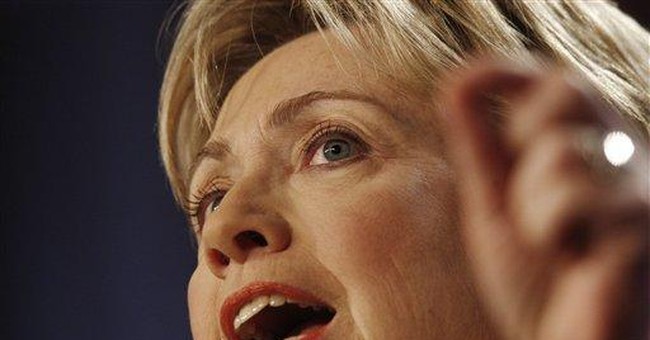 At the liberal Take Back America conference, Sen. Hillary Clinton (D.-N.Y) praised American GI’s for liberating Europe after World War II, but vowed to withdraw U.S. troops from Iraq, regardless of the political outcome in the Middle East.

“I believe the best way to support our troops is to finally start bringing them home and out of this sectarian civil war that we have no business being part of,” she said.

In her speech, the Democrat candidate for president said, “The American military has succeeded. It is the Iraqi government which has failed to make the tough decisions that are important to their own people.”

The audience booed Clinton’s remarks about Iraq, as it did last year, largely because she refuses to apologize for her 2002 vote to authorize the war.

She also told a story about former U.S. Secretary of State Madeleine Albright’s trip to Europe to commemorate the 50th anniversary of the end of World War II.

“Everywhere she [Albright] went, she saw American flags, but when she looked more closely she realized the flags had only had 48 stars and she asked people ‘Where did these flags come from?’ And everyone told her the same thing. When the American GI’s liberated Europe they passed out these flags because of course this was before Hawaii and Alaska were states. That’s why there were only 48 stars,” Clinton said.

She explained how the flags had been passed down from generation to generation “at great risk” as treasured keepsakes from Europeans who were liberated by Americans.

Of that heartwarming memory, Clinton said, “I want to be the President that restores that feeling around the world. And, equally importantly, I want to restore that feeling here at home.”

Dr. James Carafano, military historian from The Heritage Foundation, said the historical anecdote Clinton relayed had no relation to her Iraq policy.

“The analogy is just wrong,” he said.

“If she wanted to follow the European example, then the answer would be that the Americans need to stay in Iraq until the Iraqis can stand on their own, which means they have a government that can govern and they have a military that can support the government.”

Carafano explained after World War II, the United States followed a “disease and unrest formula” that dictated U.S. troops should not return home until the country is stabilized from devolving into mass death, chaos or revolution. The Allied powers occupied Nazi Germany from 1945-1949. Before withdrawing in Europe, Carafano said it was necessary that Americans prevented humanitarian crises, established a legitimate country and created security forces to support that government. “Once they did that, they could leave,” he said.

“One of the great myths is that the United State rebuilt Europe after World War II,” Carafano added. “Totally not true. The Europeans rebuilt themselves….but what we did do is that we stayed basically until the Europeans could stand on their own.”

In the Senate, Clinton has introduced two pieces of legislation geared toward immediately ending the war and brining troops home.

On February 17, she introduced the “Iraq Troops and Protection Act” that would prohibit any U.S. funding for Iraqi forces.

In a February 21 forum held by the American Federation of State, County and Municipal Employees, Clinton said, “I want to cut money for Iraqi troops. I want to cut the money that they get, because they’re not standing up and fighting the way that they said they would have.”

No other senator has signed on to cosponsor the bill with Clinton.Clinton is also the cosponsor of a bill with Sen. Robert Byrd (D.-W.V.) to “deauthorize” President Bush from conducting any more war operations in Iraq.

At the Take Back America conference, Clinton said, “The point of our proposal is very simple: to end the President’s authority for the war and force him to seek new authority. If he thinks he can get any kind of authority through the Congress, I think he is mistaken. But, we need to end the authority he is currently operating under in order to strip him of the legitimacy of going forward with his policy.”

On June 15, Clinton and Byrd sent a letter to their Senate colleagues that asked them to support their bill to end congressional approval of the war by October 11, which will be the five-year anniversary of the Senate’s vote to authorize the war.

The letter said, “That authorization, which references the government of Saddam Hussein and weapons of mass destruction, is no longer relevant.”

You can view Hillary's speech here. Her Iraq remarks begin about 22 minutes into the clip.