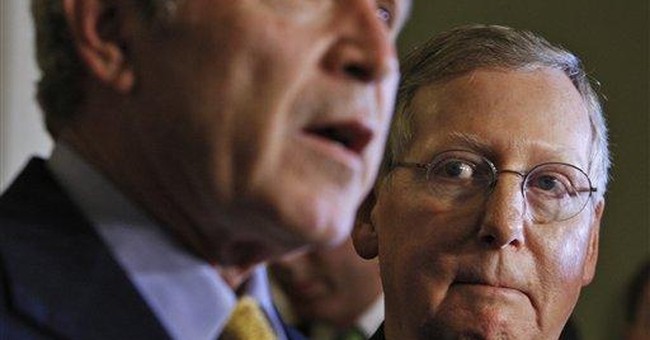 In an effort to resurrect the Senate’s immigration bill,President Bush has agreed to spend $4.4 billion to increase border security based on the premise that money would be repaid later with penalties and fines from illegal aliens seeking legal status.

In a speech before the National Contractors Union on Thursday,President Bush said that he would support an amendment to the bill that will likely be sponsored by Republican Conference Chairman Sen. Jon Kyl (R.-Ariz.) and Republican National Committee Chairman Sen. Mel Martinez (R.-Fla.).

“One common concern is whether the government will provide the resources to meet the goals in the bill,” he said. “They say, ‘It's fine to talk about it. Are you actually going to do something?’ To answer these concerns, I support an amendment that will provide $4.4 billion in immediate additional funding for securing our borders and enforcing our laws at the work site. This funding will come from the fines and penalties that we collect from those who have come to our country illegally."

White House Press Secretary Tony Snow said in his Thursday morning press briefing that the President would make a formal announcement in support of this amendment Monday. The point of doing so, Snow said, is to show the Administration is “trying to get money to the border right away.”

"By moving forward with the bill in the Senate, we will make our border more secure,” Bush said in his remarks Thursday. “In other words, if you're worried about border security, you ought to be supporting this bill."

Senate Majority Leader Harry Reid (D.-Nev.) said that he would not bring the immigration bill back up unless he received a prior commitment from 20 more Republicans to proceed. The bill was abandoned last week after only seven members of the GOP voted in favor of ending debate to move toward a final vote.

A Rasmussen Reports national phone survey conducted June 11and 12, while the President was publicly promoting the immigration bill, found that only 20 percent of voters wanted Congress to try and pass the Senate bill that failed last week. Sixty-nine percent favored an approach that focused“exclusively on securing the border and reducing illegal immigration.”

Sen. Jim DeMint (R.-S.C.) is unconvinced the $4.4 billion expenditure would rally public support for the bill. In a phone interview, he said, “If all they do is start spending money, that’s not going to convince anybody. We all know that the federal government spends lots of money and doesn’t get much done.”

Republican candidate for President Rep. Duncan Hunter () noted, “The Department of Homeland Security has almost a billion dollars on hand now for the border fence and road and lights and sensors.”

On October 26, 2006, President Bush signed the Secure Fence Act, authored by Hunter, to authorize the construction of a 2,100 mile fence along the border with .

“So, they’ve had the last seven months to build the border fence,” Hunter said in a phone interview. “The border fence, as I wrote it, is a double fence with a border patrol road in between and they’ve only built one layer eleven miles long to date.”

Hunter said if he were President he would assign “many, if not hundreds” of contractors to rapidly construct a fence. “I would give each one of them a section of the fence that was large enough, or sized in such away they could complete their section in four months. For example, you give contractor A mile one to mile two; you give contactor B mile two to mile three.I would have them build the fence concurrently.”

He said this would ensure it was build quickly. After all,he said, “it’s a fence, not rocket science.”