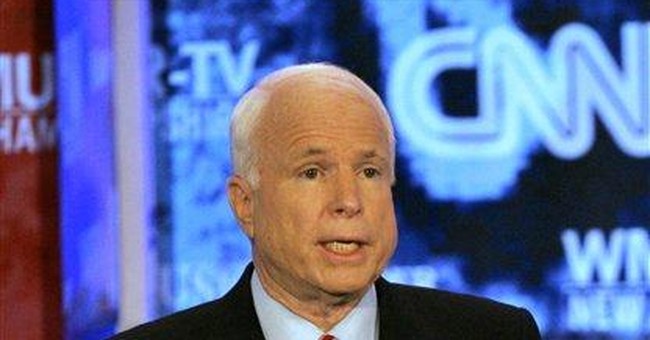 Republican presidential hopeful Sen. John McCain (R.-Ariz.) defended the Senate immigration bill despite receiving harsh criticism from all nine of the GOP’s other candidates during the presidential debate in New Hampshire Monday.

The current bill is a revamped version of the 2006 “McCain-Kennedy” immigration bill the Arizona senator wrote with the liberal Sen. Ted Kennedy (D.-Mass.).

Both bills have been labeled “amnesty” by the conservative base. When asked about their positions on immigration, Republican candidates took the opportunity to bash the legislation, calling it a “mess,” “unfair” and even “disastrous.”

Not one to shy from a fight, the former P.O.W. McCain suggested that they visit the Vietnam Memorial in Washington, D.C. There, “you’ll find a whole lot of Hispanic names,” he said.

He went on: “When you go to Iraq or Afghanistan today, you’re going to see a whole lot of people who are of Hispanic background. You’re even going to meet some of the few thousand that are still green card holders who are not even citizens of this country, who love this country so much that they’re willing to risk their lives in its service in order to accelerate their path to citizenship and enjoy the bountiful, blessed nation.”

McCain also took care to single out immigration hawk Rep. Tom Tancredo (Colo.) who is also running for President. During the debate McCain supported a statement made by New Hampshire Sen. Judd Gregg (R.) that Tancredo was part of the “know nothing wing” of the political spectrum.

To warrant this dig, Tancredo had vowed earlier to “do what is ever [sic] necessary to try to stop this piece of legislation, and that includes go after any Republican that votes for it, because the Republicans can stop this.”

Under pressure from the other candidates clamoring against him, McCain admitted: “This is not the bill I would have written.” He then challenged, “If someone else has a better idea. I’d love to have them give it to us, that will get the support of enough people so that we can pass legislation.”

Rudy Giuliani, former New York City mayor, said the bill was a typical “Washington mess” with too many compromises.

“The litmus test you should have for legislation is, ‘Is it going to make things better?’ And when you look at these compromises, it is quite possible it will make things worse,” he said.

Former Massachusetts Gov. Mitt Romney called the Senate bill a “mistake.” He said one of its biggest problems is the z visa it provides to illegal aliens. “What is allows is people who’ve come here illegally to stay here for the rest of their lives,” he said. Romney explained: “Every illegal alien, almost every one, under this bill gets to stay here. That’s not fair to the millions and millions of people around the world that would love to come here and join with family members, bring skill and education that we need. It’s simply not fair to say those people get put ahead in the line of all the people who’ve been waiting legally to come to this country.”

McCain did. “I would like to remind you that we made treaties with Native Americans, such as the Navajos in my state, where we respect their sovereignty and they use their native language in their deliberations,” he said. “It’s not a big deal.”