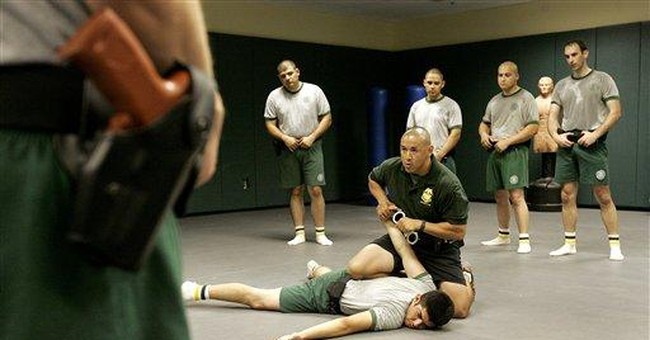 A group of former Border Patrol Agents convened on Monday to warn U.S. senators that the current immigration bill would compromise national security if signed into law.

Chairman of the National Association of Border Patrol Officers Kent Lundgren said, “First and most dangerous, is the fact that there will be no meaningful criminal or terrorist record checks of the applicants. If the amnesty passes, we will legalize them despite what past history they may have. Despite what the Administration and Congress say about record checks to ease voters’ minds, they are lying about it.”

Under the current bill, those who entered the country illegally would be eligible to obtain a “z visa” if certain requirements are met. The z visa is described as a legal, renewable, identification card that could be issued without requiring its holder to first return to their home country. In order to get a z visa, applicants must undergo a full background check.

The bill only gives government officials a single business day to determine if the applicant is a criminal. If nothing suspicious turns up within 24 hours, the applicant would immediately be given a probationary z visa that would be valid for up to six months after the official z visa is issued.

According to varying estimates, there are between 12 million and 20 million illegal aliens currently living inside the United States. All of them would be able to apply for the z visa under the Senate bill.

At the National Press Club, Lundgren explained: “There is no way that record checks can be done on that many people in a limited time frame. And the provision that [background] checks must be completed within 24 hours would be laughable if it were not so outrageous, told obviously to deceive.”

“And, it makes no mention of foreign criminal record checks, which are simply an impossibility,” Lundgren added. “There won’t even be an attempt made there.”

The bill also allows illegal-alien gang members to sign a “renunciation of gang affiliation” that would clear the applicant of past gang affiliation and help them obtain a visa. Another provision shelters illegal aliens who have defied a court ruling to leave the country. If the illegal alien, called an “absconder” in this context, could prove leaving the United States “would result in extreme hardship” to the absconder or immediate family, the criminal alien would be permitted to apply for a z visa.

Lundgren said these provisions would benefit members of the notorious terrorist gang Mara Salvatrucha 13, commonly known as MS-13, which is largely made up of illegal aliens from El Salvador and Honduras.

Another unworkable provision of the Senate bill, according to the group, is a requirement that 6,000 new agents be installed to by 2008.

Jim Dorcy, who retired as a senior special agent with the Justice Department’s Inspector General’s Office after serving the Border Patrol, said the process of hiring Border Patrol Agents is “extremely complicated and exacting.”

“To do it properly, it would take months or even year to bring on board and train personnel staff to do a minimally adequate job of pre-hire vetting,” he said.

The Border Patrol’s residential training program is 19 weeks long. Its curriculum includes immigration law, physical training, firearms instruction, driving and the Spanish language. There is only one training facility, located in New Mexico, where potential agents can receive this instruction.

To qualify for Border Patrol training, a recruit must pass a three-part entrance exam that gauges reasoning skills, a recruit's ability to learn Spanish and job-related experiences and achievements. During resident training, an agent must complete 200 hours of Spanish-language instruction and then pass periodic refresher courses.

Dorcy said that there has already been a rush to bring agents on staff that has comprised their ranks. “The rush to hire is bringing about agents in place before background checks [on the agents] are completed,” he said. “There have already been illegal aliens, not just aliens, but illegal aliens found in the green uniform. Other agents have been found to be married to illegal aliens, and still others have illegal family members. That is a conflict of interest, even for the agent who has the best of intentions.”

Former Chief of U.S. Border Patrol Hugh Brien, a legal immigrant from Ireland, asked listeners to pay special attention to recent news reports. “I am sure you have read about the potential terrorist that were scoping out Fort Dix, New Jersey,” he said “Did you notice that the report said that two of them were illegal aliens who entered the border between the United States and Mexico? They are certainly not the only ones.”

On May 7, six men--the “Fort Dix Six”--were arrested for plotting an attack on the Fort Dix military base in New Jersey. Three of the men were brothers, who migrated with their family illegally from Mexico to the United States in 1984. None of the family members were ever given legal status. Yet, the family owned and maintained a roofing business, called Colonial Roofing, in Cherry Hill, New Jersey. The business was approved by Cherry Hill’s local zoning bard in December 2000.

Brien said worrying about illegal immigration was “a good reason to stay awake at night. No one knows how many [potential terrorists] there are, where they come from and where they are now. Worst of all, we don’t know what they are up do and that can hurt us badly.”

The National Border Patrol Council, a union for Border Patrol Agents 11,000 strong, also opposes the Senate immigration bill. T.J. Bonner, president of the NBPC, said in a May 17 statement the legislation “needlessly jeopardizes the security of this Nation.”

“Rewarding criminal behavior has never induced anyone to abide by the law,” Bonner said. “And there is no reason to believe that the outcome would be any different in this case.”