Clinton: "Something Has to be Taken Away from Some People" 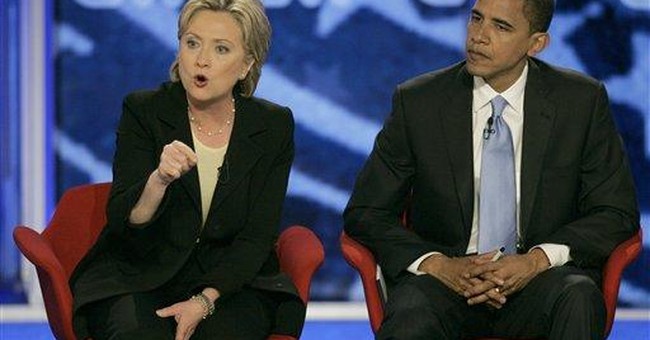 During a nationally broadcast forum Monday evening on faith and politics Sen. Hillary Clinton (D.-N.Y.) attacked the free market and told listeners in that order to attain energy independence and provide universal health coverage, it would be necessary to “take away from some people.”

“An uninsured person who goes to the hospital is more likely to die than an insured person,” Clinton said. “I mean, that is a fact. So what do we do? We have to build a political consensus. And that requires people to give up a little bit of their own turf in order to create this common ground.”

She went on, “The same with energy. You know, we can’t keep talking about our dependence on foreign oil and the need to deal with global warming and the challenge that it poses to our climate and to God’s creation and just let business as usual go on, and that means something has to be taken away from some people.”

Clinton made these comments near the end of her allotted 15-minute portion of the event.

Clinton also said that “the adult society has failed” young people “who are tremendously influenced by the media culture and by the celebrity culture.”

“I think that we have failed them in our churches, our schools and our government,” she said. “And I certainly think the free market has failed. We’ve all failed.”

The New York senator said something similar to “taking things away from some people” at a June 2004 private fundraising event in San Francisco. There, Associated Press reporter Beth Fouhy wrote that Clinton told attendees Democrats should take money back from taxpayers who benefited from President Bush’s tax cuts.

Clinton told her donors, “We're not coming to you, many of whom are well enough off that actually the tax cuts may have helped you, and say 'we're going to give you more.' We're saying, 'you know what, for America to get back on track and be fiscally responsible, we're probably going to cut that short and not give it to you.”

She added, “We’re going to take things away form you on behalf of the common good.”

On the campaign trail, each of the three leading Democrats running for their party’s nomination for President, Clinton, former North Carolina Sen. John Edwards and Sen. Barack Obama (Ill.), have said he or she would repeal the Bush tax cuts to help finance universal health care.

The June 4 event was hosted by Sojourners, a social justice movement for progressive Christians. Founder Jim Wallis is the author of “God’s Politics: Why the Right Gets It Wrong and the Left Doesn’t Get It.”

CNN’s Soledad O’Brien moderated the forum. It aired on that station Monday evening from 7 p.m. to 9 p.m.