Thompson on the Run 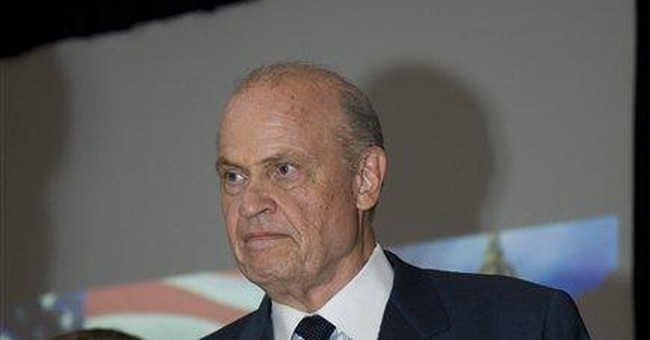 Former Tennessee Sen. Fred Thompson (R.)set the strongest signal of his intentions to date when he told potential donors on a conference call yesterday afternoon that he will formally announce his decision to run for President over the Fourth of July weekend and could file papers to start raising money as soon as June 4.

Today, Thompson is not a formal candidate for the Republican nomination for President, but he is tied with former Massachusetts Gov. Mitt Romney in the Real Clear Politics poll average. Both Thompson and Romney are polling 10 percent. Sen. John McCain (R.-Ariz.) is polling 18.2 percent and the former New York City mayor Rudy Giuliani is leading with 26 percent.

Thompson, a former Law and Order star, is rumored to have a wealthy financial network with his strong ties to Hollywood money and a bevy of donors to tap in his Tennessee network. Former Senate Majority Leader Bill Frist, who heads the powerful political action committee VOLPAC that could aid Thompson’s fundraising, has been publicly encouraging Thompson to run since March.

Even so, he will have to raise money quickly in order to make a good showing in the second “money primary” when receipts are due to the Federal Elections Commission on June 30.

Since hinting in an interview on FOX News on March 11 that he might run for President, Thompson has been busy delivering policy speeches across the country and writing on conservative websites.

Thompson’s recent media schedule has been packed with events likely designed to court Republican favor. Fellow Tennessean, Rep. Zach Wamp, organized a meeting for Thompson on Capitol Hill in April where, according to Wamp, 53 House conservatives came to speak with the former senator. Thompson also booked an event at the May 4 annual Lincoln Dinner in Orange County, California that was taped by CSPAN. On May 24, he spoke to the Connecticut Republican Party.

Thompson, a blogger, special programs host and senior analyst for ABC Radio, has been publishing both columns and blogs on conservative websites, including Townhall.com.

While Thompson is popular with grassroots conservatives, his support for his longtime friend John McCain’s (R.-Ariz.) and Sen. Russ Feingold’s (D.-Wisc.) campaign finance reform legislation gives conservatives reason to pause. Thompson was one of only four Republicans who voted for the bill. Thompson told the Wall Street Journal’s John Fund on March 18 that the law didn’t work out as he intended. Fund said that when asked about its loopholes, Thompson threw up his hands in exasperation and said, “I’m not prepared to go there yet, but I wonder if we shouldn’t just take off the limits and have full disclosure with harsh penalties for not reporting everything on the Internet immediately.”

On other red meat issues, however, that reverberate with the base, like the War on Terror, immigration and the liberal media, Thompson has been hitting high notes.

At an event for the Electronic Data Systems Corp. on April 27, he said he supported helping Iranians overthrow President Mahmoud Ahmadinejad’s government. He said that Tehran is "playing a larger part in killing our soldiers" in neighboring Iraq.

He blasted the Senate immigration bill on Townhall on May 19. He said, “A nation without secure borders will not long be a sovereign nation. No matter how much lipstick Washington tries to slap onto this legislative pig, it's not going to win any beauty contests."

He even posted a video online attacking Michael Moore’s latest “documentary” that praised surviving victims of 9/11 for getting medical treatment in Communist Cuba. The video was made available at Andrew Breitbart’s website. In the video, Thompson puffed a cigar and told Moore he “ought to think about” entering himself into a mental institution.

Thompson was elected to the Senate in 1994 and decided not to seek reelection in 2002. During his term he compiled a reliably conservative record. The American Conservative Union gave him a lifetime rating of 86 out of 100. In comparison, Sen. Chuck Hagel (R.-Neb.) has an identical rating.

Since leaving the Senate, Thompson has been in and out of Washington to work on various political issues. In 2005, he was tapped by President Bush to help usher through the nomination of John Roberts to become Chief Justice of the United States Supreme Court. Thompson also works with Secretary of State Condoleezza Rice as chair of the bipartisan International Security Advisory Board.