Liberal Hypocrisy on the 2008 Campaign Trail 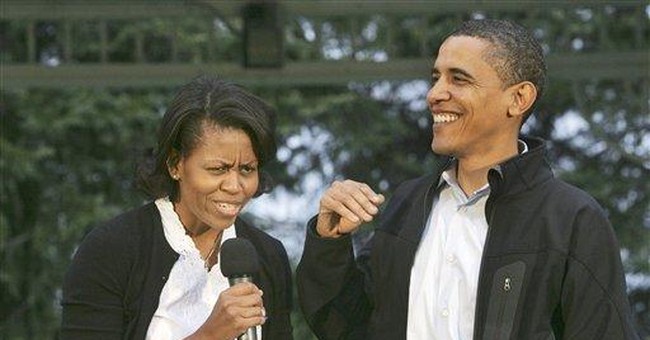 There’s been no shortage of stories to strengthen the “hypocrite” label that’s dogged John Edwards’s presidential campaign, but that doesn’t mean the other Democrats running for the White House haven’t been acting holier-than-thou.

Here are few liberal campaign follies you might have missed because you were watching the Johnboy’s “I Feel Pretty” YouTube for the 100th time.

OBAMA WANTS YOU TO BUY A HYBID, HE LIKES AV-8

Last month, Barack Obama traveled to Detroit, Michigan to chastise auto industry officials for not producing as many hybrid vehicles as he’d like. In the Motor City, he praised Japanese hybrids for averaging 45 miles per gallon. Listeners were stunned when Obama criticized that Americans “were spending their time investing in bigger, faster cars” while “foreign competitors were investing in more fuel-efficient technology.” He said, “Whenever an attempt was made to raise our fuel efficiency standards, the auto companies lobbied furiously against it spending millions to prevent the very reform that could’ve saved their industry.”

The Detroit Free Press’s Mark Phelan reported that the Obama family auto isn’t a hybrid, though. Obama packs his wife and two daughters into a V8 Hemi-powered Chrysler 300C that gets about 25 miles per gallon. “Obama’s choice proves once again that fuel economy is seldom the No. 1 factor when Americans buy cars,” Phelan wrote.

Members of the anti-war group Code-Pink take pride in the number of times they get arrested outside of Hillary Clinton’s office or at her campaign events. This is ironic because as a 1969 Wellesley graduate, Hillary made the cover of Life magazine for a speech she gave celebrating the right to protest. Her caption underneath her feature photo? A quote from the fresh-faced radical’s address that said, “Protest is an attempt to forge an identity.” At the time, she said protest allowed people to come “to terms with our humanness.”

Barack Obama wants you to believe he is a straight-talking candidate, but he was willing to alter his life story for political gain down in Selma, Alabama. When he went there on the anniversary of “Bloody Sunday” he made up a sham of a story about his birth. There, he said his parents fell in love and conceived him as a result of “what happened in Selma.” He said, "There was something stirring across the country because of what happened in Selma, Alabama, because some folks are willing to march across a bridge. So they got together and Barack Obama Jr. was born. So don't tell me I don't have a claim on Selma, Alabama. Don't tell me I’m not coming home to Selma, Alabama."

Michelle Obama recently resigned from the board of TreeHouse Foods Inc., a major food supplier to Wal-Mart. She became a board member in 2005 and was paid $51,200 by them since then, according to tax forms. She said it was because of “increase demands” of her husband’s campaign. More likely, her resignation was because of demands from Big Labor. Mr. Obama has been a leading supporter of the group WakeUpWalmart, a union-backed campaign dedicated to organizing the mega-store and demanding pay hikes for Wal-Mart workers.

This week, Bill Richardson told the Washington Post he hoped to avoid the “Hispanic label.” He said, “I’m not running as Hispanic candidate, but I’m trying to convince Hispanics that I am Hispanic, and they don’t know.” He explained, “I go to Los Angeles, they don’t know I’m Hispanic. When they know, it’s a positive.” Richardson also defended the embattled U.S. Attorney General Alberto Gonzales because of his race. When asked about Gonzales’s management over the firings of eight U.S. Attorneys, Richardson defended him because of his race. Richardson told the media: “The only reason I’m not [calling for Gonzales’s resignation] is because he’s Hispanic, and I know him and like him. It’s because he’s Hispanic. I’m honest.”

Hillary Clinton supports burdensome campaign finance reform legislation. Yet, even with scores of lawyers and staff, she can’t keep up with the laws. When she filed her Senate financial disclosure forms in February she “forgot” to disclose anything about her involvement with her husband’s multi-million dollar charity, the Clinton Global Initiative. Since 2001, Hillary has been a treasurer and secretary of CGI, but she didn’t report her affiliation with the group until the Washington Post discovered the omission. Among those who received grants from CGI was the Dana Blair Foundation. James Blair, husband to Dana Blair, was the one who helped Hillary earn $100,000 profit in a suspicious cattle future gamble thirty years ago.

And, of course---the Edwards story that exemplifies liberal hypocrisy at it’s best:,

Former North Carolina Sen. John Edwards ate crow when the San Francisco Chronicle found out he took $55,000 from the taxpayer-funded University of California Davis to deliver a speech on “Poverty, the great moral issue facing America.” This disclosure comes just weeks after the Politico found receipts for two $400 haircuts for the candidate in his first quarter campaign finance reports. When asked by NBC’s Matt Lauer how he might convince the public that he is “not just a rich guy talking about poverty,” Edwards replied, “I’m a have.”