The Week in Review: Immigration, Reforms, and Pirate's Booty 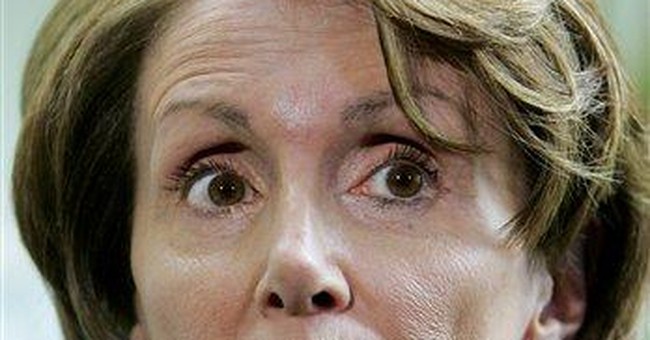 VICTORY AT HOME FOR IRAQ

President Bush emerged victorious over the Democrat majority by securing an Iraq spending bill that did not contain a withdrawal date or any tools to enable Congress to micromanage the war as Majority Leader Sen. Harry Reid (D.-Nev.) and Speaker Nancy Pelosi (D.-Calif.) promised their base they would.

Through the week, Democrats tried desperately to convince media that they had not conceded anything to the White House. They insisted the bill was a sign that “progress” in the direction to withdrawing troops from Iraq. But, even the New York Times wouldn’t take the bait. The paper ran a headline that declared congressional Democrats had “ceded ground” to the White House.

Democrats did manage to sneak one win into the bill, though—a provision to increase the federal minimum wage from $5.15 an hour to $7.25 per hour. Minority Leader Sen. Mitch McConnell (R.-Ky.) said, “This needs to be the last time these kinds of extraneous matters are parachuted into appropriations bills.” The final version of the bill also contained $17 billion in extra spending--including $6.4 billion in hurricane aid and $3 billion in farm subsidies.

Chairman of the Republican Conference Rep. Adam Putnam (Fla.) sneered at the Democrats’ talking points. He told reporters, “We stripped two of three and the spending is significantly reduced. I think that’s a pretty good work week. If it’s such a great deal [for Democrats] why isn’t Pelosi voting for it?”

The infamously hot-tempered Sen. John McCain (R.-Ariz.) exploded at Sen. John Cornyn (R.-Tex.) in a private meeting as debate on immigration reform kicked off early in the week. When Cornyn criticized McCain skipping immigration reform negotiations to campaign for the Republican nomination for President, McCain said to Cornyn: “F*** you.” A McCain spokesman later described the incident as a “spirited exchange.” On the House side, Minority Leader John Boehner (R.-Ohio) colorfully expressed frustration with immigration proceedings, calling the Senate version of the bill a “piece of s***.”

Democrat leadership introduced the bill Monday and tried to rush a final vote of passage before Memorial Day recess, but Republicans demanded that the over 1,000 pages of the bill receive a full two weeks of debate on the Senate floor. Conservative Sen. Jeff Sessions (R.-Ala.) was instrumental in convincing Congress to spend more time it. He held a press conference with Heritage Foundation experts who estimated the bill would cost taxpayers $2.3 trillion in order to pay out lifetime benefits to illegal aliens through various social services. Sessions also adamantly criticized the way the bill was drafted in secret, behind closed doors and sarcastically referred to the “gang of 12” senators who negotiated the bill as “masters of the universe” through the week.

House Republicans filed a motion to recommit the lobby reform bill after Democrats had gutted legislation they said would create “the most open and ethical Congress in history.” By doing so, Republican leadership strengthened the bill so that it subjected all lobbyists to House ethics rules, closed the revolving door between lobbyists and staff members, increased transparency in the earmarking process and required lobbyists who “bundle” campaign donations to disclose their activities.

On May 16, Speaker Pelosi tried to handcuff Republicans from making a move like this. Since January, House Republicans have used the motion to recommit thirteen times to help them achieve legislative victories over objections from Democrats, to pass measures to protect U.S. military recruiters from campus discrimination and to protect American passengers from frivolous lawsuits when they report potential terrorist activities.

The motion to recommit is a law that has been in place since 1822 that allows the minority party to send the bill back to committee, which can effectively kill it. When they got news of her intentions, Republicans stopped her by scheduling a series of 12 “protest votes” at 30-minute intervals.

House Majority Leader Steny Hoyer (D.-Md.) dismissed Republicans’ outrage over Pelosi’s attempted power grab in a session with reporters Tuesday--two days before Republicans used the rule again to push for tough lobby reform. He said, “If you look at all the hullabaloo most of the Republicans motion to recommit has not been used for substantive objectives but for ‘political gotcha’ games. As a result, I think, they [the public] will be less sympathetic for the crocodile tears [Republicans] shed.”

After Republicans filed and won their thirteenth motion to recommit, the lobby reform bill passed 346-71. Democrat appropriations leader and outspoken war critic Rep. Jack Murtha (D.-Pa.), who roiled headlines through the week over a controversial earmark in the intelligence spending bill, voted against the bill. Earlier in the week, he said the legislation was a “piece of c***.”

ON THE SECOND TIER

Fred Thompson has still not announced whether he will pursue the Republican nomination for President, but it looks like he is getting closer to jumping into the race. Thompson nabbed up a bona-fide conservative endorsement when former Federal Elections Commissioner Michael Toner agreed to become his head lawyer. Toner served the FEC for five years and as chairman in 2006 before his term expired. Before going to the FEC, Toner was chief counsel to the Republican National Committee and worked for President Bush’s 2000 campaign.

Meanwhile, New Mexico Governor and former Secretary of Energy Bill Richardson announced his intentions to run for the Democrat nomination for President and is trying to find a way to emphasize his Mexican heritage, but avoid being labeled the “Hispanic candidate.” His recent comments about U.S. Attorney General Alberto Gonzales, however, are not going to help him avoid the latter category. Last month, when asked about Gonzales’s management over the firings of eight U.S. Attorneys, Richardson defended him because of his race. Richardson told the media: “The only reason I’m not [calling for Gonzales’s resignation] is because he’s Hispanic, and I know him and like him. It’s because he’s Hispanic. I’m honest.” Richardson is a long-shot candidate, but if he does manage to break into the higher-tier, his management of the Los Alamos National Laboratory as Secretary of Energy will surely be reexamined. During his tenure, the lab suffered major security lapses when two computers’ hard drives were stolen that contained classified information on nuclear weapons.

If former North Carolina Sen. John Edwards continues to reinforce his image as a liberal hypocrite, there is a strong chance Richardson could take his place as the number three Democrat candidate. Edwards took a beating this week when the San Francisco Chronicle discovered that the millionaire, whose campaign contains a pledge to reduce college tuition costs, accepted a $55,000 speaking fee from a taxpayer-funded college. The title of the lecture he was paid to deliver at the University of California Davis was “Poverty, the Great Moral Issue Facing America.” Edwards had campaigned for Vice President in 2004 largely on a populist “two America’s” theme about the disparity between the wealthy and the poor. Today, his 2008 presidential platform includes a plank dedicated to reducing tuition costs for college students. This embarrassing disclosure comes just weeks after the Politico found receipts for two $400 haircuts for the candidate in his first quarter campaign finance reports. Conservative bloggers eagerly used this new information to recycle the 2004 YouTube video clip that caught Edwards preening before a television spot. The video was set to the song, “I Feel Pretty,” and is largely responsible for Edwards’s his “Breck Girl” nickname.

It also turns out that Edwards may also get a hefty stake in a treasure trove of gold and silver at the bottom of the Atlantic Ocean. Edwards is senior adviser and major investor to the New York-based Fortress Investment. He owns 9.9% in a fund whose company just discovered a sunken ship filled with a pirate’s booty worth of treasure. The estimated worth of the riches? $500 million.

When asked by NBC’s Matt Lauer how he could might convince the public that he is “not just a rich guy talking about poverty,” Edwards replied, “I’m a have” and that he believed the “American people will judge me as a human being.”

On the policy side, while delivering a speech at the Council of Foreign Relations, Edwards said that the War on Terror was a “bumper-sticker” slogan created by the Bush Administration to drum up support for their Iraq policy. He also blasted an email through the anti-war group Support the Troops End the War’s website that suggested Americans show thanks for their nation’s military by distributing anti-war petitions and taking anti-war signs to Memorial Day ceremonies.

Speaker Pelosi probably won’t be able to help Edwards make those signs--she will be embarking on a “Global Warming Tour” over recess. With a small delegation of liberal House members, she is scheduled to travel to Greenland to visit a glacier, London to dine at the U.S. embassy and stop Brussels to hold meetings with leaders of the European Union about climate change.