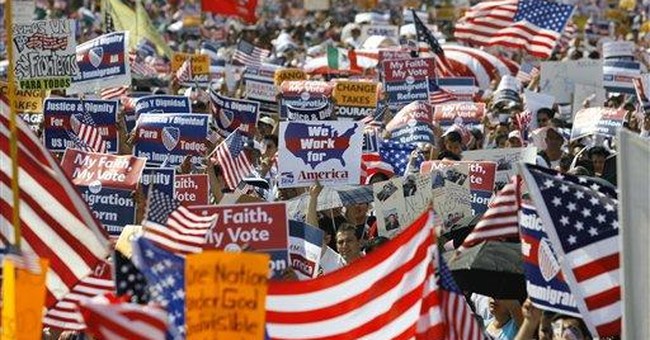 America’s immigration bureaucracies are rife with waste and inefficiency. Yet taxpayer dollars are not the only thing they put at risk. The nation’s security suffers, too.

According to a report released last week, twenty-three recently apprehended Somalis with suspected ties to the Islamist Al-Sabaab Mujahadeen were mistakenly released from a Mexican jail last January. American officials believe they are trying to enter the United States. So what are our immigration officials doing in the face of this threat? They’re busy protecting us from the supposed scourge of foreign labor.

The U.S. Customs and Immigration Service (USCIS) is requesting $103.4 million in 2011 to continue the failed E-Verify program. The program was designed to prevent the hiring of illegal immigrants, but a recent audit conducted by Westat and funded by the Department of Homeland Security (DHS) revealed that it failed 54 percent of the time (while legal immigrants and American citizens were denied employment around 2.5 percent of the time).

Then there is USCIS’ Office of Citizenship and Immigrant Integration, which, for a mere $18 million, is trying to integrate immigrants into American society, which is what they do without government prodding.

U.S. Customs and Border Protection (USCBP) is requesting $574 million for border fencing, infrastructure, and technology. Earlier this year the Government Accountability Office found that the $1.1 billion already sunk into the border fence won’t even come close to fulfilling its stated objectives. High-tech border solutions have been ineffective as the sensors detect anything that moves just the same, from illegal immigrants to animals to tumbleweeds.

Immigration and Customs Enforcement (ICE), which enforces immigration and other laws, is spread thin engaging in activities that have little, if anything, to do with immigration—from enforcing Mexico’s gun laws to investigating intellectual property theft overseas. It has 25 top security concerns spread out across the country with little focus.

Together, ICE, USCIS, and USCBP will have over 90,000 employees and a $20 billion budget next year. Yet rather than spend those limited resources in a futile attempt to regulate the labor market—such as by conducting immigration raids on meat packing plants—the government should devote them to fighting real security threats.

Making legal immigration into the United States easier would dramatically improve the nation’s security. There are currently 10.8 million illegal immigrants in the United States, of whom the vast majority have not committed any crime other than circumvent our labyrinthine immigration laws. Almost all would have entered legally given a reasonable option.

Today, a low-skilled Mexican worker would need to wait 11 years to get a green card and then another five to apply for citizenship—and that’s assuming no bureaucratic holdups. There is no good reason for such a long wait. The issuance of green cards should be expedited, with only criminals and suspected terrorists screened out.

America’s immigration services should focus all of their energy and resources on weeding out real threats to national security, rather than trying to fruitlessly manipulate labor markets. Foreign workers, whether in the form of low skilled manual laborers or computer engineers, create economic opportunities, not security threats.

Forcing immigrants underground creates an enormous black market where terrorist activities and serious crimes can continue undetected. If legal immigration were much easier, the American government would know who was entering the country and do a better job in screening out criminals and suspected terrorists.

America has a huge immigration black market. Millions of undocumented workers enter and leave the United States every year without regard for legal channels. Legalizing future immigration along with amnesty will destroy much of the black market.

Liberalization, not control, will make us safer by allowing the government to shift its focus from checking permits at fast-food restaurants to legitimate threats like the twenty-three suspected Islamist militants trying to break into the U.S.