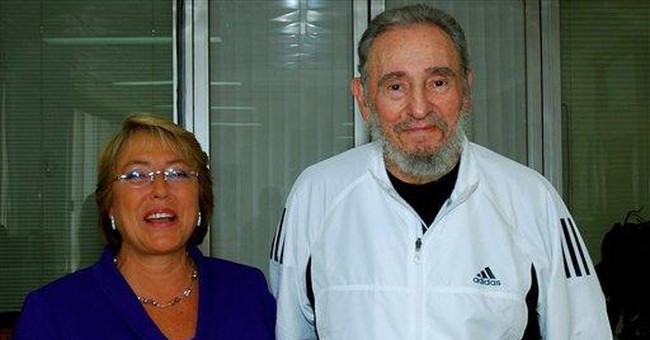 “I am for socialism, disarmament, and ultimately for abolishing the state itself as an instrument of violence and compulsion,” wrote one particularly ambitious contributor in his 1935 Harvard 30th anniversary classbook. “I seek social ownership of all property, the abolition of the propertied class, and sole control by those who produce wealth. Communism is the goal.”

Seventy-two years later, the American Civil Liberties Union still abides by those words – penned by its founder, Roger Baldwin, who, incidentally, also said that advancing “civil liberties” in countries like the Soviet Union or its satellite nations really wasn’t all that important.

Happily, most of those nations have come around to a different viewpoint. But while the rotten tree of communism has fallen around the world, there remains one last stubborn root not far from the coast of Florida: Fidel Castro’s Cuba.

Cuba remains the ACLU’s “Fantasy Island,” where – to hear them tell it – happy Marxist children play together in perfect harmony, and the state makes sure its citizens are cared for from cradle to grave.

At least that’s the glorious depiction in a book titled Vamos a Cuba (“Let’s Visit Cuba”) that the ACLU wanted to keep on the bookshelves of a Florida school. The book makes the communist state sound like a trip to DisneyWorld. But as it did on the TV show Fantasy Island, illusion in Cuba quickly gives way to harsh reality.

While the book is filled with commentaries on how Cubans enjoy chicken with rice, it neglects to mention that, under the country’s subsidized ration plan, the average Cuban is allowed only 8 ounces per month. Cubans are shown “boating,” but “boating” for most Cubans means trying to escape from the repressive regime on fragile, homemade rafts.

And mysteriously missing is any mention of the 20-year prison sentences handed out to Cuban poets, journalists, and priests who don’t fall on their knees and worship the communist regime.

When a Cuban-American parent who had escaped political imprisonment in Castro’s “utopia” expressed his concern that the book only showed the Cuba its communist leaders wanted children to see, the Miami-Dade County school board evaluated the book and agreed. They pulled the book from its school libraries. That’s when the ACLU – always eager to preserve delusion – got involved and sued the school district.

This is the same ACLU that endorsed an amendment lifting the ban on tourist travel to Cuba – a long distance slap in the face to Cubans, who now watch foreign tourists feed corruption, pesos, and dollars to the communist government.

Thankfully, the U.S. Court of Appeals for the 11th Circuit recently came down on the side of the school board and ruled they could remove the book. But the ACLU is not giving up, pledging “further legal action.”

Now, you might be saying, why all this fuss about a little book – one more annoying gnat amid the ACLU’s swarm of legal mosquitoes?

Well, the irony is that even while the ACLU is suing to allow communist indoctrination into public school libraries, it is suing to keep a lot of other books – which don’t line up with ACLU ideology – out.

Want your child to learn about other views besides evolution? The ACLU says no. Evolution must be taught, and other options, such as intelligent design, must be silenced.

Want your child to learn that marriage is the union of one man and one woman? The ACLU says no. “Alternative lifestyles” must reign supreme in the classroom – all in the name of tolerance and “diversity.”

Want your child to learn that abstinence is the only 100-percent effective way to prevent teen pregnancy? The ACLU says no. Schoolchildren must learn how to engage in potentially harmful sexual behaviors at any time and any place.

When it’s something the ACLU wants your children to learn, regardless how inaccurate the presentation, they will sue to silence parents and force-feed their leftist view of “education” on America’s children.

A majority of American parents clearly don’t realize how determined the ACLU is to impose its will on them, to indoctrinate their children, and to promote its own warped legal “vision” for America. It’s a vision that’s closer to the harsh reality of Castro’s Cuba than the fantasies books like “Let’s Visit Cuba” want America’s children – and grown-ups – to believe.