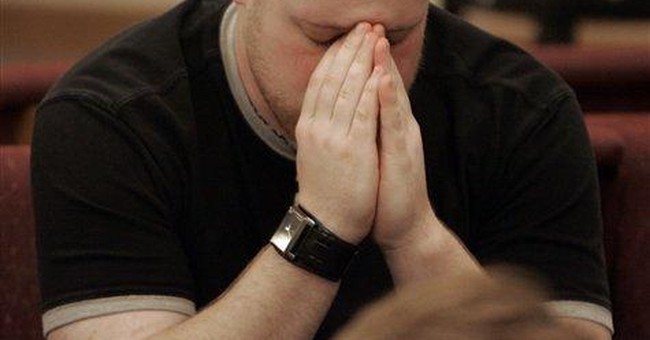 While the organization likes to promote itself as the prime defender of First Amendment rights, at least two of those rights are a sharp ideological thorn in the ACLU’s flesh: freedom of religion (if it involves publicly acknowledging God), and freedom of speech (if that speech is formed as a prayer).

Since the National Day of Prayer is perhaps the ultimate cross-pollination of these two American ideals, it’s bound to set the collective teeth of the ACLU and its affiliated activists on edge. Leftists, after all, are only really fond of America when it’s being sledge-hammered into support for an atheistic agenda by complicit courts and pandering politicians.

Which is interesting, since it was in 1952 that President Harry Truman signed a Congressional resolution creating the National Day of Prayer. One wonders if the sudden inclination to formalize invocations was in part a response to the looming global threat of Bolsheviks with the Bomb.

Of course, the ACLU – whose founder famously deemed civil liberties “unsuitable” for Russia – has always been less afraid of bombs than of Boy Scouts…more worried about praying children than preying Communists…more concerned with mature Christians than murderous terrorists. After all, a terrorist can only kill you, or destroy your way of life, while a good Sunday school teacher can teach you to…love your neighbor.

Let the kids pray, right out loud, and next thing you know, they’re acting like…a George Washington, or Abraham Lincoln (to cite a couple of famous pray-ers.) Worse, they could follow the example of Billy Graham, or a Mother Teresa. There’s a couple of people who messed up the world.

Courage. Decency. Conscientious citizenship. That’s a pretty stiff price to pay for a “moment of silence.”

Yet, somehow – for all the ACLU’s aggressive efforts in courtrooms across America to eliminate invocations at city council meetings and graduation exercises and public events throughout the nation – prayer persists. People just keep talking to God.

And some of them insist on doing it right out loud.

Leftists are especially fond of citing that old Quaker quote about “speaking truth to power.” It makes them feel brave – standing up to a gracious, polite society, calling for the decimation of the spiritual foundations of Western civilization – with no one to back them up but an omnipresent mass media, a posse of increasingly activist judges, and the glittery Hollywood Thought Police.

The irony, though, is that public prayer is the ultimate venue for speaking truth to power.

Mother Teresa understood that. Invited to share a few words the 1994 National Prayer Breakfast, she responded with some stabbingly plain truths about abortion:

“Any country that accepts abortion is not teaching its people to love one another but to use any violence to get what they want,” she said. “This is why the greatest destroyer of love and peace is abortion.”

Those words brought hundreds to their feet, but not President Bill Clinton – or Mrs. Clinton, or Vice President Al Gore. Seats planted, faces set like stone, that potent trio gazed, dazed, on the wizened old face of wisdom…and sat powerless, for a moment, in the face of the truth.

The fact is, praying virtually requires the speaking of truth to power – after all, if you don’t believe God is omnipotent, why pray at all? And if you do believe, what would be the point of trying to conceal the truth from an omniscient Being?

No point at all … which is why real public prayer is not just an act of worship, but an act of revelation – affirming our deepest beliefs to ourselves, and to anyone who’s listening.

Maybe that’s why ACLU attorneys balk and rage at the prospect of public prayer. The truth is not often something they’re fond of hearing.

There’s still a difference between acknowledging a faith and endorsing it. And there remains a power greater than mere government, stronger than any law, and more enduring than any camera or microphone.

When – as individuals, as churches, as communities, as a nation – we speak His truth, that power can change anything.

Even the hearts of the ACLU.