NFL Gains A First Down For The First Amendment 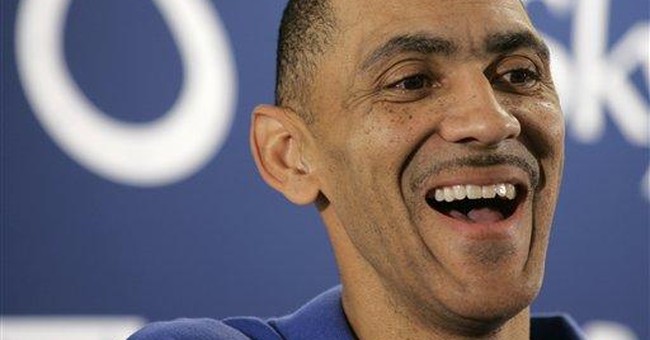 In a month thick with madness, on and off the basketball court, it was football, curiously enough, that breathed a little sanity into the national conversation.

“Conversation” has been hard to come by, lately, in a nation crowded with increasingly volatile views on everything from the war to the candidates of an election still well over a year away. Amid the general din, though, no issue is raising more voices and blood pressures in the nation’s courtrooms and legislatures, newsrooms and churches, than the morality of homosexual behavior – and the effort to silence those who oppose it.

Now, ordinarily, the NFL isn’t considered one of our great bastions of insight on either moral dilemmas or free speech. And indeed, this is an issue on which a surprising lineup of big-time media players have already fumbled the ball.

Isaiah Washington may yet lose his job on television’s top-rated drama, for using a slur in referring to a fellow cast member who openly practices homosexual behavior. Ann Coulter tossed the same epithet at Democratic candidate John Edwards, and unleashed the furies of even her fellow conservatives. And no amount of apologizing could help former NBA star Tim Hardaway after he told an interviewer, “I hate gay people.”

Statements like these are despicable and unacceptable in civil discourse. However, they’re not the main reason these celebrities have been sacked by a brutal onrush of profoundly hostile public opinion. After all, much of this country revels in prurience and profanity … prides itself on its obscene gestures … embraces the “genius” of comedians who’ve made a career out of lewd slurs and crude insults. Why should the crudities of these latest “stars” suddenly be considered offsides?

Because the backhands against these blackguards are based less on what they said than on the fact that what they said offends the wrong people: the media caretakers of political correctness.

Free speech, these days, is in the gimlet eye of some sharply suspicious beholders, and it’s now a de facto crime in America to express any opinion contrary to that of the cultural dictators. Christians are regularly chided about a few Puritans who long ago stuck people in stocks for offending their communities – but the Left relentlessly uses cameras and cable shows for exactly the same effect.

Should personal abuse be encouraged, in the name of free speech? Absolutely not. Indeed, discrimination is deplored by every thoughtful Christian and every real American. But the root of this growing cultural lynch-mob mentality is not intolerance for intolerance – it’s intolerance for disagreement.

That distinction became more clear than ever when General Peter Pace, chairman of the Joint Chiefs of Staff, recently said, “I believe that homosexual acts between individuals are immoral and that we should not condone immoral acts.”

Nobody cared that the general had carefully construed these as his personal beliefs. The flag on the play was the mere idea that a public figure would openly question the morality of homosexual behavior. On this field, the ball is only supposed to move in one direction.

Which is why the crowd went wild again, a few days later, when Indianapolis Colts Coach Tony Dungy decided to go long in the other direction. Dungy stood up at an Indiana Family Institute event and respectfully declared his support for their conservative, Christian agenda – which includes vigorous efforts to protect marriage from radical revisionists.

“We’re trying to promote the family,” Dungy said, “(and) family values, the Lord’s way. IFI is saying what the Lord says. I’m on the Lord’s side.”

Dungy was quickly denounced for unnecessary roughness, although – as the popular coach of the current Super Bowl champions – he was spared the worst of the invective that piled on General Pace. Still, you could fairly hear the pell-mell rush to push microphones in the faces of NFL officials, as the media drooled over the chance to blow the coach’s remarks into a full-scale p.r. disaster.

Instead, the League doused them with an upside-down cooler of common sense.

“(Coach Dungy), of course, is free to speak to any group he wishes,” said Colts owner Jim Irsay, through a spokeswoman.

“Coach Dungy is speaking for himself and expressing his views, which he is fully entitled to do,” said NFL officials. “No doubt there are people in our league that have a different view. We respect the right of employees to have and express their views and don’t regulate the political or religious views of team or league employees.”

Well, now. Imagine. Americans free to speak their mind, share their views, without fear of political persecution or loss of a job. That’s a startlingly original point of view, in the brave new world of political correctness that increasingly demands we all goose-step to the same media mandates.

Those pressing the same-sex political agenda, in particular, are not only compelling lawmakers and the culture to affirm their homosexual behavior – but insisting that every American be forced to embrace and applaud that behavior.

Here’s to the NFL, for so effectively blocking that tackle. In doing so, they made a hole big enough for Coach Dungy to carry the beleaguered First Amendment a few more crucial yards toward the goal line.