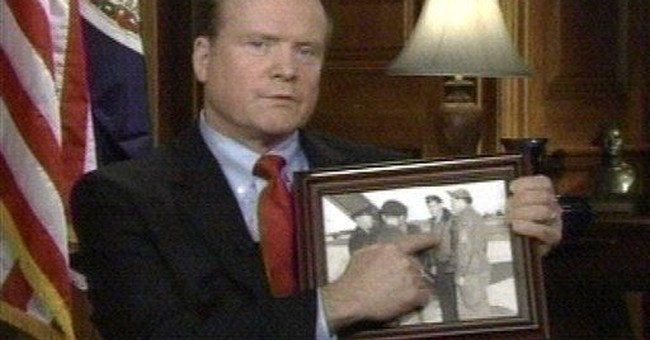 Since President Bush's State of the Union Address quickly garnered a generous share of criticism, it seems more useful to take a look at the economic comments offered in rebuttal by Virginia's new Democratic senator, Jim Webb. The Democrats are in charge, and they picked Webb to explain their party's Jacksonian vision thing.

He began by repackaging John Edwards' Two Americas: "When one looks at the health of our economy, it's almost as if we are living in two different countries. Some say that things have never been better. The stock market is at an all-time high, and so are corporate profits. But these benefits are not being fairly shared."

The benefits from stock market gains (and the losses from stock market downturns) go to people who invest their own money in corporate stock, often through retirement plans. What is unfair about that? When many homeowners banked huge tax-free capital gains in recent years by selling their homes, did politicians suggest those gains ought to be fairly shared?

It is equally senseless to speak of corporate profits "not being fairly shared." Profits are a residual -- whatever is left over from the money collected from customers after subtracting the costs of production. Companies can use profits to pay dividends or expand the business.

Grants of stock options, a fourth of which go to corporate executives and three-fourths to other employees according to a Fed study, have some impact on how stock market gains are shared among those who own stock. But those gains do not come out of corporate budgets or profits and do not affect the amount of revenue available to pay wages and benefits.

"When I graduated from college," says the senator, "the average corporate CEO made 20 times what the average worker did; today, it's nearly 400 times." The latest Economist says, "If you look back 20 years, the total pay of the typical top American manager has increased from roughly 40 times the average ... to 110 times the average now." Pick a number. Nobody tells you where they come from because the less you know, the more likely you'll be fooled.

Webb's estimates were surely from the Economic Policy Institute (EPI), which claims the average CEO earned 262 times as much as the average worker in 2005. He might as well call that 110 or "nearly 400" because it's mostly guesswork. There are no statistics on what an "average" CEO makes, because most companies are too small to be counted in the flawed surveys of newspapers and magazines.

There are also no good statistics on what the average worker makes. The Bureau of Labor Statistics explicitly warns that the figure the EPI uses is "not the earnings average of 'typical' job or jobs held by 'typical' workers." It is constructed by taking a weekly sum and dividing it by about 33 hours a week, because part-timers are included. The EPI then massages that "hourly" average into an annual salary by multiplying it times 2080, as if everyone worked 40 hours a week. The resulting figure greatly understates typical incomes of full-time employees and excludes nearly 40 percent of all jobs.

Webb added, "Wages and salaries for our workers are at all-time lows as a percentage of national wealth, even though the productivity of American workers is the highest in the world." He meant national income not wealth, but it's a mystery what he meant by comparing how income is sliced to relative international levels of productivity.

Labor compensation averaged 65 percent of national income since 2001, but in the third quarter of last year it was 63.9 percent. In 1997, it was also 63.9 percent. When Webb graduated in the glory days of 1968, worker compensation was 63.7 percent of national income, up from 61.1 percent in 1965. Labor's share was often highest in the deepest recessions, such as 67.2 percent in 1982, because profits were so depressed. Populists who gripe about rising profits should look at what happens when profits fall.

Real, inflation-adjusted compensation per hour fell every year from 1993 through 1995 but has risen by at least 1 percent a year ever since -- even during the nasty energy shock of the past few years. Falling profits would not make the recent pay gains look any better, but falling oil prices will.

Real compensation adjusts for inflation, including costs of medical care and education, but Webb hopes to count those twice. "Medical costs have skyrocketed," he says. But most people pay only a small fraction of their medical bills because 85 percent have health insurance that is largely financed by taxes or tax deductions and because deductibles and co-payments are usually small. The poor and near-poor face no medical costs because of Medicaid.

"College tuition rates are off the charts," he says, confusing sticker prices with actual expenses. Statistics on "tuition per full-time equivalent" measure what colleges receive, not what students pay, including all tuition paid by third parties, such as Pell grants. What students pay is commonly cut in half by institutional aid (discounting), and further reduced by government and private scholarships and aid.

Webb went on: "Our manufacturing base is being dismantled and sent overseas. Good American jobs are being sent along with them. In short, the middle class of this country, our historic backbone and our best hope for a strong society in the future, is losing its place at the table. Our workers know this, through painful experience. Our white-collar professionals are beginning to understand it, as their jobs start disappearing, also."

Manufacturing dismantled? "Over the 12 months ending in December, total industrial production increased 3 percent," reports the Federal Reserve, "to a level that was 112.4 percent of its 2002 average." U.S. production of cars and trucks rose 3.5 percent in 2004, 5.9 percent in 2005 and at a 7.3 percent rate in the first three quarters of 2006. Overseas auto plants were sent here, not the other way around.

U.S. jobs are disappearing? Employment was 145.9 million in December, up from 142.8 million a year before. If only bad jobs are increasing, why are average and per capita U.S. incomes rising? Why are so many U.S. shopping malls, restaurants and highways so infuriatingly crowded?

I sometimes wish that people who don't know what they're talking about would simply refrain from talking. Personally, I'd rather watch "Desperate Housewives" than despairing politicians.