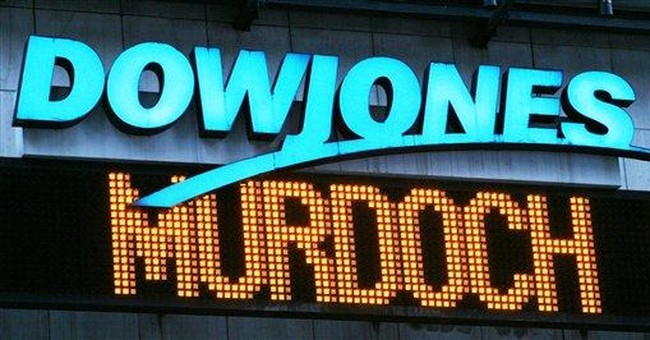 Help, the sky is falling! So say the pro-regulation media agitators at Free Press, which fired off what is sure to be the first of many hysteria-ridden press releases about Rupert Murdoch's successful acquisition of the Wall Street Journal and its parent company, Dow Jones & Co. "This takeover is bad news for anyone who cares about quality journalism and a healthy democracy," argued Robert W. McChesney, president of Free Press. "Giving any single company—let alone one controlled by Rupert Murdoch—this much media power is unconscionable."

The argument that the Murdoch–Dow Jones marriage will have a significant impact on American journalism or democracy is absurd. Don't get me wrong. The Journal is a great paper; in my opinion, it represents the pinnacle of journalistic excellence. Nonetheless, it's just one of many voices shouting to be heard in today's media cacophony. Indeed, the modern media marketplace is extraordinarily dynamic, with new outlets and technologies developing constantly. Despite the existence of a handful of very large conglomerates, dozens of other important media companies continue to thrive and fill important niches that the big firms have missed. As Columbia University's Eli Noam has noted of the modern media marketplace, "While the fish in the pond have grown in size, the pond did grow, too, and there have been new fish and new ponds."

Or oceans, perhaps. As my recent City Journal article, "The Media Cornucopia," points out, close to 14,000 radio stations are broadcasting today, a number that has nearly doubled since 1970; satellite radio, which didn't exist before 2001, has roughly 13 million subscribers nationwide. Eighty-six percent of households subscribe to cable or satellite TV, receiving an average of 102 channels of the more than 500 that are available. Americans could read any of 18,267 magazines in 2005 (up from 14,302 in 1993). According to the Internet Systems Consortium, the number of Internet host computers—computers or servers that allow people to post content on the Web—grew from just 235 in 1982 to roughly 400 million in 2006. At the beginning of 2007, the blog-tracking service Technorati counted over 63 million blogs, with more than 175,000 new ones created every day. In light of these realities, it's difficult to see how Rupert Murdoch's move to buy the Journal makes much of a difference in the larger scheme of things.

McChesney and other critics argue that Murdoch will intentionally degrade the quality of the Journal's reporting. But where's the business sense in shelling out a stunning $5 billion for Dow Jones and then torpedoing its flagship? Further, Murdoch already owns other papers and media properties that offer more populist, headline-grabbing fare. Why would he spend a fortune only to turn the Journal into a competitor to one of his other outlets?

What Murdoch is really after is the value that goes with the Dow Jones and Wall Street Journal brand names. Those brands, and the enormous talent behind them, will give Murdoch a fighting chance in his ongoing push to expand into financial journalism and develop a financial-news cable channel. Anything that degrades those brands, or drives away the companies' talent, will hurt Murdoch's chances of capturing the sophisticated audience that he's seeking.

If Murdoch really intended to turn the Journal into something offering only "infotainment" and "cookie-cutter content," as McChesney argued in the Free Press statement, shouldn't leftist critics actually favor the purchase? After all, the Left told us for years that the Journal was little more than a tool for capitalist interests and free-market causes, but the wide respect that the award-winning paper enjoyed tended to contradict the claim. If Murdoch turned the Journal into the equivalent of a second-rate blog, it would be easier for critics to make the case that it wasn't worth anyone's attention.

But critics will persist in such arguments because they understand that Murdoch makes an easy symbolic target in the ongoing media-policy wars. "We can only hope the culmination of this deal is the wake-up call Washington needs to start rolling back media consolidation," McChesney said. His many books on media policy provide a road map for the radical reform that he has in mind. In one, he casts media regulation as part of a broader movement to achieve "social justice" through "a broad anti-corporate, pro-democracy movement." He also speaks of the need "to rip the veil off [corporate] power, and to work so that social decision making and power may be made as enlightened and as egalitarian as possible." In another, coauthored with John Nichols of the Nation, he asserts that "the need to promote an understanding of the urgency to assert public control over the media has never been greater."

Such hysteria would be laughable if McChesney's Free Press weren't spearheading a bona fide antimedia movement. Despite its radically antimarket thinking, the organization continues to gain attention and credibility in policy debates over the future of American media. And Free Press recently partnered with a leftist think tank, the Center for American Progress, to issue a report, "The Structural Imbalance of Political Talk Radio," that claims that the popularity of conservative voices on the radio dial—the result, clearly, of audience demand—must actually be due to "multiple structural problems in the U.S. regulatory system."

Murdoch's deal for Dow Jones shouldn't worry the FCC or Congress. But we can count on McChesney and his band of radicals to play it up as the beginning of the end times—and to call, of course, for more and more stifling regulation of our thriving American media.