GOP Senators: Our Immigration Plan Is Pro-worker and Pro-Growth 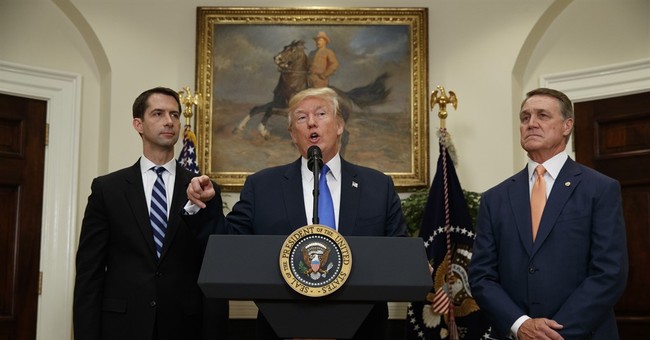 President Trump got big applause last week during a speech in Ohio when he called for fixing our immigration system. Instead of a “terrible system where anybody comes in,” the president advocated for a “merit-based system, one that protects our workers” and “our economy.”

According to polls, most Americans agree with him, but our outdated immigration laws do the opposite.

The basic principles of those laws haven’t been changed in over half a century, making them divorced from the needs of our economy, while also depressing working-class wages. That’s why we’ve introduced the Reforming American Immigration for a Strong Economy Act, which updates our immigration laws to attract more ultra-high-skilled workers — and give working-class families the raise they deserve.

The ideal immigration system should have three objectives. First, attract the young and highly skilled, since they provide the biggest boost to our economy. Second, seek out people who can integrate into American society most effectively. Third, give priority to uniting immediate families, since it’s better to give precious green cards to parents and their minor children rather than to fill out someone’s family tree with grown siblings and cousins.

Our current immigration system achieves none of these goals. Each year, the United States accepts around 1 million immigrants as legal permanent residents, which is twice our historical average. That’s like adding the population of Montana every year, but only one out of fifteen immigrate for employment reasons. The majority come here on family-based visas, without regard to their skills or our needs.

As a result, half of all immigrant households receive benefits from our social welfare system.

That’s not good for any American, but it has especially steep costs for people who work with their hands and on their feet for a living. Wages for Americans with only high-school diplomas have dropped by 2 percent since the late 1970s, and for those who didn’t finish high school, they’ve dropped by 17 percent. While the twin trends of automation and globalization have also strained working-class Americans, a steady supply of cheap, unskilled labor has as well. And immigration is the trend we can change most easily.

Our legislation would do just that by creating a skills-based points system similar to those used for decades in Canada and Australia. A points system identifies and attracts the world’s most-skilled immigrants. And by limiting the flood of low-skilled workers, it would encourage employers to hire, train and pay more to American workers already here.

The new system would have a two-step process.

First, potential immigrants would apply online to U.S. Citizenship and Immigration Services and pay a $160 screening fee. They’d receive an immediate score, on a scale of 0 to 100, based on education, age, job, investment, extraordinary achievements and English-language ability.

One would get points for investing $1.35 million and retaining an active management role on the project. Points are awarded for extraordinary achievement, such as a Nobel Laureate. Finally, one would also receive points for English-language proficiency on recognized assessment tests.

The new system would retain immigration preferences for the spouses and minor children of U.S. citizens and legal permanent residents, but not for most extended and adult family members. It would eliminate the so-called diversity visa lottery, which hands out green cards randomly without regard to skills or family connections, is plagued by fraud and doesn’t even promote diversity. It would also remove per-country caps on immigration, so that high-skilled applicants aren’t shut out of the process because of their country of origin. In addition, the bill would cap the number of refugees offered permanent residency to 50,000 per year, in line with a recent 13-year average.

These changes are pro-worker, pro-growth and proven to work. They would ultimately reduce our annual immigration levels by half after ten years and reorient it toward high-skilled workers, which is just what our economy needs. Furthermore, these changes have widespread public support. They would raise wages for working Americans, create jobs, give immigrants a decent shot at moving up the economic ladder and make America more competitive. It makes no sense to stick with 50-year-old immigration laws. Let’s finally bring them into the 21st century.