Carrying the Torch of Freedom 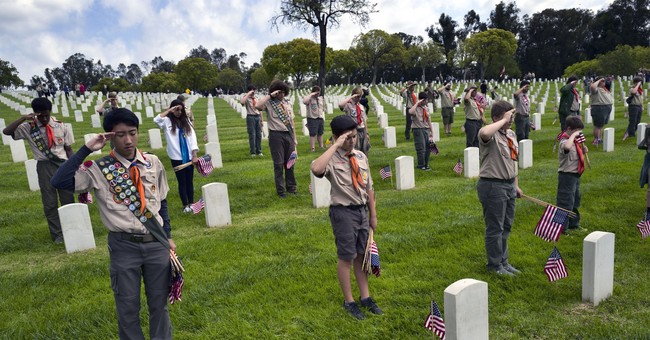 Americans have a renewed sense of the extent of their liberties by being the victims of overbearing government action in the coronavirus outbreak. We ought to be enjoying our freedom to assemble, freedom to worship, freedom to speak our minds and protest tyranny. We often take these God-given rights for granted.

Our rights have been preserved for generations because of the sacrifice of men and women who have served in our military for almost 250 years. According to the U.S. Department of Veterans Affairs, 1,190,085 individuals died in U.S. Military Service during Wartime from 1775-1991. Thousands have died in the Global War on Terror.

Americans owe a seemingly insurmountable debt to these heroes. They selflessly and courageously sacrificed so that their children, grandchildren, and countrymen could live in the sunlight of freedom.

Arizona has had many service members who have paid the ultimate price in the line of battle. One of the most famous in Arizona (and around the nation) is Pat Tillman, who was killed in Afghanistan in 2004. He had enlisted in the U.S. Military after the September 11 terrorist attacks. Tillman turned down millions of dollars and increased fame in the NFL to serve his country. He knew the risks; he knew he might never return home again, yet he enlisted and served regardless.

U.S. Army Staff Sergeant Alexander W. Conrad is another Arizonan who paid the ultimate price for freedom. On June 8, 2018, Staff Sergeant Conrad, of Chandler, died in Somalia from injuries sustained from indirect enemy fire, while assigned to the 1st Battalion, 3rd Special Forces Group, in support of Operation Octave Shield. His service includes two tours in Afghanistan in support of Operation Enduring Freedom. He was posthumously awarded the Purple Heart, Bronze Star with Valor, and Meritorious Service Medal.

All of us, no matter what walk of life we have chosen, can carry the torch of freedom, complementing the efforts of those who have militarily defended American freedoms. Former U.S. President Ronald Reagan once stated: “Freedom is never more than one generation away from extinction. We didn’t pass it to our children in the bloodstream. It must be fought for, protected, and handed on for them to do the same, or one day we will spend our sunset years telling our children and our children’s children what it was once like in the United States where men were free.”

Vigilance for freedom is the duty of every American. Each of us are charged to defend our freedoms, that these freedoms may be enjoyed by future generations of Americans.

As former U.S. President Abraham Lincoln said in his Gettysburg Address: “It is rather for us to be here dedicated to the great task remaining before us – that from these honored dead we take increased devotion to that cause for which they gave the last full measure of devotion – that we here highly resolve that these dead shall not have died in vain – that this nation, under God, shall have a new birth of freedom – and that government of the people, by the people, for the people, shall not perish from the earth.

Thank you to all of our military heroes who have paid the ultimate sacrifice for our freedoms. We pledge to honor your memories by ensuring that the ideals you fought for – government of the people, by the people, for the people – shall not perish from the earth.